I would really like to emphasize that librarians are the driving force behind the general public’s access to knowledge, says Ellen Tise, chairperson of the worldwide library organization IFLA. While working on with the preparations for August’s big IFLA conference in Gothenburg, with an attendance of around 3000 librarians from all over the world, she met with students and staff at the School of Library and Information Sciences.

“It is always interesting to get the opportunity to go to seats of learning that have teaching in library and information sciences, since I think those subjects determine where we stand and where we are headed,” says Ellen Tise.

“It is, of course, important to come here, as so many representatives of library and information sciences are coming to Borås this summer. IFLA has long been connected to Sweden through international library cooperation, so I felt eager to come here to learn more about the fields of study being developed.

“It seems as though the School of Library and Information Sciences is in the forefront when it comes to looking at new fields. The courses and programs that have been introduced and developed here are unorthodox and unique. Take, for example, the web editing program. Libraries too, want to develop in that direction and become more up to date and relevant, for example when it comes to social media.”

The theme for the IFLA conference in Gothenburg, “Unlimited Access to Knowledge that Promotes a Sustainable Development,” is inspired by Ellen Tise’s theme as the organization’s chairperson.

“Giving everyone access to knowledge is one of the fundamental principles behind libraries, there’s nothing new there. But nowadays there are other actors, such as Google. So libraries and librarians need to reclaim their status as important suppliers of information – since libraries are one of the few public institutions that are able to provide free and reliable information to all parts of society,” says Ellen Tise.

Her theme not only touches upon about access to information in general though; she also wants to promote a sustainable development worldwide. Where there is information, there is knowledge, is her point.

“In order to produce new information and new knowledge, you need to have been able to access knowledge from the onset. In order to be able to think and invest something novel, you need above all to find out what others have done, which is why we do research.”

“We can only think more sustainably if we know more about what we know, and thereafter improving what we know. If we don’t produce new knowledge, we stagnate. Then nothing happens. So by furthering the access to knowledge I hope to make a contribution to sustainability.”

Before and After Google

During her first visit to Borås, Ellen Tise had an hour to meet students from the librarian program. Her agenda included disseminating information about IFLA’s work and organizational structure, and also discussing what tasks a library had, in relation to Google for example. Here is where she found one of the major strengths of libraries; when companies patent discoveries and new knowledge and research is copyrighted, Google cannot publish it. But libraries can, they buy licenses and organize information in databases – thereby making it more accessible to the general public.

“People talk about BG and AG, Before and After Google. To that I say that the libraries were here before Google, they coexist with Google and they will survive Google. And I am one hundred percent sure that whomever thought out Google had just visited a library,” she says to the delight of her audience. 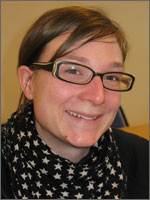 Klara Jennische works as a volunteer at the IFLA conference in Gothenburg. She is also the president of the student union section for the library school and one of the students that got to meet Ellen Tise.

“I enjoyed meeting her ‘in real life,’ there’s been a lot of talk with the conference and all. It’s nice to find out a little bit about what goes on with IFLA and with her personally.” 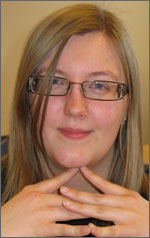 Linda Åhman, a sophomore at the librarian program, agrees and points out that there was a little commotion ahead of the president’s visit, but that meeting her was nice.

“It is fun to talk to someone who displays enthusiasm like that, with a heightened pitch and moving hands. She gestures when something is extra interesting or important.”

“Yes, several times she said ‘I can go on about this forever,’ and her commitment was apparent,” says Klara Jennische. “She seems like a fun person, with a lot of interest in what she does and I like that.”