Her interest in information retrieval and searching in her own family history lead to studies in Library Science. Her interests have now resulted in a historical novel. <br /> - All that Remains’ is about loneliness, says Elin Boardy, who has built the story around her mother’s grandmother on the island of Orust. 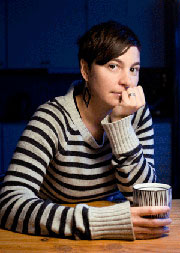 It was fascination over the scarce descriptions in case records from Vänersborg Hospital and Asylum that deepened Elin Boardy’s interest in the destiny that was hidden beneath the lines. A few years back, when she and her mother started genealogizing, she had no idea that it would one day lead to a full literary debut.

- I wrote shorts stories when I bumped into this story, and it grabbed a hold of me, says Elin Boardy and explains that it was particularly the short descriptions of a woman’s grief that touched her.

’All that Remains’ is a fictional tale focusing on the character of Emma. The lack of information triggered Elin Boardy’s imagination, and for the three years during which she wrote the novel she faced the problem of how “true” the story was to be. The goal was to describe a state of human loneliness, both physically and existentially. A timeless loneliness that pertains specifically to a woman.

- Most of the time it is male destiny that we get to read about in historical documents, explains Elin Boardy, who is an avid reader of historical novels.

This spring she graduated from the School of Library and Information Sciences at the University College of Borås. The opportunity of combining her interest in literature with practical knowledge of information retrieval appealed to her. In retrospect , Elin Boardy feels that she has been given useful skills for her writing.
- One always has to do research, in one way or another, she concludes smiling.

The medial interest for newly graduated student’s full literary debut has grown over the past few weeks. At present Elin Boardy is working on more fictional writing. She describes writing in itself as a propellant.
- It is a way for me to examine the world.