The number of police officers with an ethnicity another than Swedish has to increase. That is why the Police Authorities in Västra Götaland put in the heavy artillery, in cooperation with the University College of Borås and the City of Borås. A new kind of distance education focusing on multitude was presented at a press conference at the Police Department today. As soon as during the spring of 2009 the first candidates are enrolling at the University College of Borås. 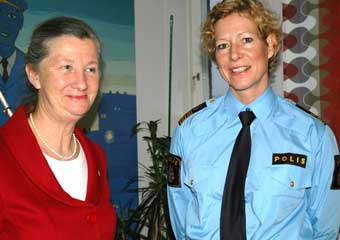 The starting gun for the recruitment to the new distance education has been fired. The recruiting time will be short. The 15th of March is the last day for applications. The Police Authorities and the University College hope to see an increase in the number of applicants with a non-Nordic background then. The Rector at the University College, Lena Nordholm, and Lena Matthijs, Assistant Local Police Chief, are very pleased about the cooperation and view it as a pilot project that may assume larger proportions.
“I see the distance education as a step en route to hosting a Police Academy”, says Lena Nordholm. 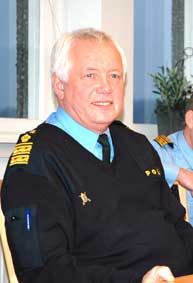 ”The University College of Borås have documented skill in reaching the target group we are after, and therefore we are pleased with the cooperation. On the part of the police, we have simply been too unsuccessful in attracting people with another ethnical background. In addition Västra Götaland has poorer statistics in that field than the rest of the country. Increasing police competence in the field is a question of legitimacy and confidence in society”, says Ingemar Johansson.

The Importance of Role Models

A staggeringly small share of the students being admitted to police training today have a non-Nordic background states Lena Matthijs. Of the 216 student who started police training in Växjö in January, only two have non-European ancestry.

“This distance education programme is part of a bigger initiative from the police”, she explains and emphasises other aspects such as training in upper secondary school and coaching of applicants for the preparatory education at Hjälmared folk high school and the University College of Borås. 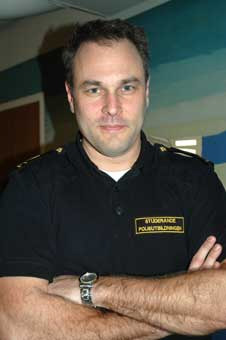 Fredrik Meius is an example of a police candidate studying the distance training programme. Just before he started the programme, he had attended the preparatory training at Hjälmared folk high school.

“That functioned as the gateway for me. I was given the opportunity to raise my grades and get insight into police work.”

“After completing the preparatory programme I as admitted to the upper secondary school teacher programme at the University of Gothenburg and started that programme while I was going through the tests for admission to the police training programme.”

He believes that his academic experience might be part of the reason why he was admitted to police training.

Students with a foreign background might therefore be a new target group for the police training recruiters. In a short while information assemblies will be arranged at the University College of Borås and a few seats of learning in Gothenburg. 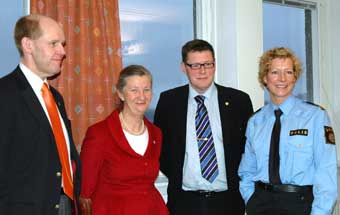 Chairman of the municipal executive board Ulrik Nilsson, too, views the placement of a new kind of distance training programme in Borås as a service to the city.

“It is pleasing to show that Borås is offering a police training programme. In the long term it also provides us with the opportunity to have more policemen in the city.”

In the picture above, he is seen in conversation with Lena Nordholm, University College Rector, Jörgen Tholin and Lena Matthijs. The number of places at the distance training programme in Borås is yet unclear. The number will be decided upon come summer.