No Square Thinking When Smart Textiles Are In Focus

- It is about a new way of thinking. In the same way the hand is to fit the glove, the textile is to be used in architecture. So says Mette Ramsgaard Thomsen from the Danish University of Architecture. She was one of several inspiring researchers lecturing at Ambience 08, the international scientific convention focusing on intelligent textiles, arranged by the University College of Borås on the 2nd and 3rd of June.

Smart Textiles is a subject on everybody’s lips, over 130 researchers from 18 countries gathered in Borås. The choice of theme for the convention was design and technology, and the fact that the two are equally important and belong together was demonstrated not least by the two inaugural speakers. Joanna Berzowska, professor of design from Concordia University in Canada, gave a few concrete examples of how interactive garments can be used, from a social perspective. Robert J. Young, professor from the University of Manchester in the United Kingdom, took things to a molecular level and spoke of the advantages with two polymer fibres, Kevlar and PBO Zylon.

Today’s Impression on the Garments of the Future 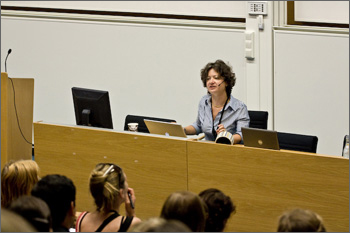 Joanna Berzowska is also a member of the Hexagram Research Institute in Montreal and the founder of and research director at XSLabs, where her research team develops innovative methods and applications in electronic textiles. She plays along into creating and is always on the lookout for the unexpected. With images, she showed garments that leave a message when you wave your arm, that give away sounds when you move and that have applications that react to body heat.

The Energy Issue is Important

But the time is not yet here for smart textiles – a problem that many researchers are facing right now is how to retain the energy in the electronic textiles. 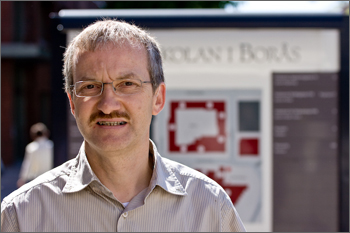 - The energy issue has to be solved and the textiles of the future have to be environmental or recyclable, says Bernard Paquet.
He is a researcher at CENTEXBEL, a research institute for the Belgian textile industry, and he is part of several development projects. He says that an important issue right now for the researchers is establishing contacts with the industry in order to develop usable commercial products.
- It is incredibly important to bring together experts from both the fields of design and technology. Now we have a base to build from. 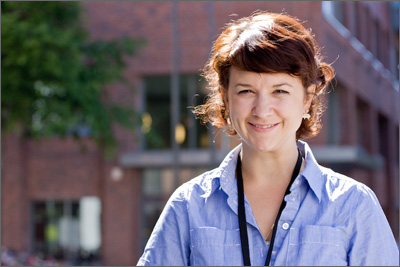 - Trees and plants are incredible! If we can create textiles that perform three of the feats that trees perform, then we have achieved a lot. Nature has no waste, it only offers food and resources.

The words are Rachel Wingfield’s, and her lecture was the highlight of the convention. She says we should learn form nature and be inspired by the life cycles of plants. Plants grow and bloom – the same idea should be applied to smart textiles – and it’s no impossibility. Rachel Wingfield works at Loop.ph – a London-based research studio focusing on closing the gap between design and science and putting an ecological touch on everything. The team has specialised in developing textiles that react to their environment. She teaches to encourage students to create things that offer new solutions and through workshops her team shares their knowledge and ideas.

- By growing plants on our textile biowalls we clean the environment and bring oxygen to it.
City living, in particular, is dear to Rachel Wingfield and is something she is working on right now. She says that by 2030, 60 per cent of the world’s population will be living in cities and twenty years later that number will have increased to 80 per cent.

- Therefore we have to create cities for the future and use textiles as structure.
Absorbing solar energy in textiles during the daytime, then letting the textiles spread light at night is just one of her many ideas.

Mette Thomsen, architect at the Danish University of Architecture occasionally cooperates with Rachel Wingfield. She held a lecture during one of the parallel seminars, about two projects she has been involved in. According to her it is about getting the architects to see the opportunities with textiles – to not think traditionally square.
- The textile allows for a three-dimensional way of thinking, where one isn’t dependent on traditional shapes, but can create new ones. The architect can speak to the construction and dress it according to its shape.
Mette Thomsen demonstrated two scenarios, the first was for a bathroom where the textile surface gave a sensual impression at the same time as the wall was water-resistant. The second scenario was an office that was given a living wall with a variety of storage spaces.
- Smart textiles don’t need to react quickly to their surroundings. It can be a slow process, growing into the architecture like children growing up. It is all about seeing the opportunities and daring innovation.

On Monday night a convention dinner was arranged at the Textile Museum. The guests were treated to a highly appreciated fashion show by fashion design students from the first year of the fashion design programme. By the time coffee was served, the winner of the newly founded award Fiberrik (Fibre Rich) was revealed. The much sought after prize of 200 000 SEK was won by the Borås company Oxeon. They were given the prize for their textile product in the field of technical textiles, enabling manufacturers of for example airplanes, bikes and kayaks to create products with characteristic looks. A great market potential, both short and long-term, was seen in the idea. 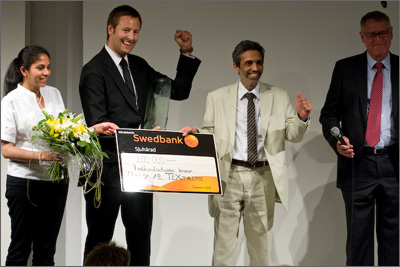 The happiness was great with company representatives Prartahanaa Khokar, Fredrik Ohlsson and Nandan Khokar. The award is intended to stimulate more people to invest in idea rich textile development. In all, 38 entries were made to the contest. Behind the award are the Föreningssparbanken Foundation (Stiftelsen Föreningssparbanken), Sjuhärad, Smart Textiles, the trade organisation Teko and the Municipal Union of Sjuhäradsbygden.