A cooperation with the University of the State of Santa Catarina was started last Tuesday when the first step was taken when an understanding was reached. 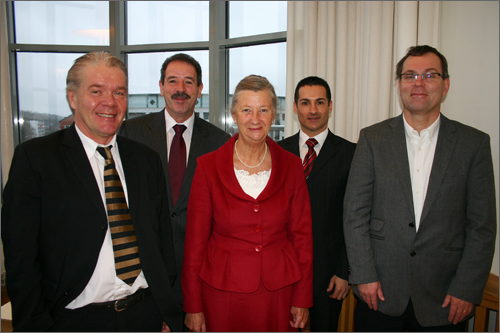 Rector Sebastião Iberes Lopes Melo and Amauri Bogo, dean of international relations, visited Borås last Tuesday and Wednesday. An understanding was reached, and is now the basis for the continued cooperation between the University of Borås and the University of the State of Santa Catarina at a departmental level.

“The University has a structure which is very similar to the one we have at the University of Borås, particularly when it comes to fields of study. The fact that they have educational programmes focusing on library and textiles makes it all extra interesting. We also share problems and challenges. We've established a very nice connection and a mutual understanding,” says rector Lena Nordholm.

Major Interest in Research and Resources at the University

All of the University's departments were visited, to find common ground to focus cooperation around, both in terms of research and education.

Sebastião Iberes Lopes Melo and Amauri Bogo were very impressed by the equipment that researchers and students have at their disposal at the School of Textiles' workshops and in the School of Engineering's laboratories. They also took great interest in the University's research focus in resource recycling, medical technology and smart textiles.

Hans Björk, head of department at the School of Engineering, who is the initiator of the exchange between the Brazilian University and the University of Borås, will visit a number of universities in Brazil this December, among them the University of the State of Santa Catarina, for continued talks. Close at hand is a possible Linnaeus-Palme exchange.

Initially, both parties want to start with teacher and research exhanges, and from there move on to student exchange. 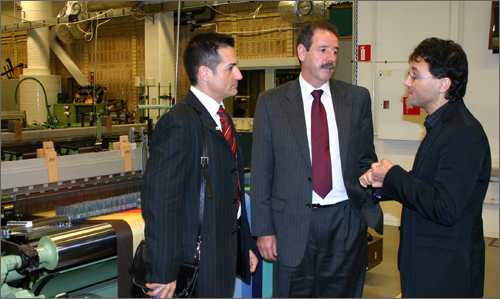 Image: Rector Sebastião Iberes Lopes Melo and Amauri Bogo were overwhelmed by the technological resources, here demonstrated by head of deparment Erik Bresky, at the School of Textiles.

Facts: The state of Santa Catarina is located in the southern parts of Brazil and is inhabited by almost six million people. The state has the highest wealth per head quote in Brazil and enjoys  the highest average standards of living in the country. It is also the coldest part of Brazil, with both frosty nights and the occasional snow storm during the winter. The state harbors a great deal of immigrants from Germany and Italy, which leaves its mark on culture.

The University of the State of Santa Catarina was founded in 1965, and has six campuses, located all over the state, from north to south, east to west. Each campus has a unique focus, where technology is studied mainly  in Joinville in the north-eastern parts of Santa Catarina, and agriculture and forestry science as well as environmental technology is located in the western parts of the state. Computer technology, education, psychology, health and sports and economics are also subjects at the University.