Textile Challenge with Focus on the Environment

Everybody can and must take part in saving our world. Ecological products and fair trade goods aren't enough. The entire consumption society has to change and this is where the designer plays an important part. <br />Challenges in saving the environment where the focus of this year's second Textile Challenge which was arranged at the School of Textiles on the 22nd of October. Touching nature images by the world renowned photographer Mireille de la Lez showed that we have to act now – man's actions are gravely affecting animal life in the Arctic.

“Everybody copies everybody else today. It is about fashion that has fallen out of fashion, but you have all the opportunity in the world of getting back in command. Utilize today's interest in the environment. The time is now.”

“Consumers want so much more than to just buy ecological products, they want to take part in saving the environment.”

There is no mistaking that Simonetta Carbonaro is dedicated to her research on consumer behavior. Her commitment is contagious and it inspires. She is of the opinion that design is power and that a new change in attitude is necessary in order to build a sustainable society.

Images of Nature That Challenge 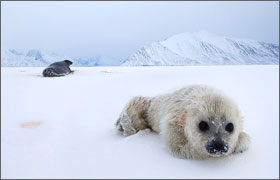 Photographer Mireille de la Lez's story accompanying her images from the Arctic was a natural continuation of Simonetta Carbonaro's call to action. She was born in Sweden and is a photographer for National Geographic. She also just came out with the book “World of Ice”. Her story is an important story of ice, extreme conditions and climate changes. For five years she has  lived with and gotten to know the wild animals of the Arctic as well as documenting the environment there.

“Through my pictures I want to create commitment to the environment. We shouldn't just know about the climate changes, we have to do something too.”

And her images have stirred up some debate. They have been published in more than 400 articles, among them many of the world's biggest daily papers.

“The environmental debate often focuses on numbers and false propaganda. I want to make it a moral issue where I communicate with heart and feeling. You don't fight for a cause if you don't care.”

And her beautiful pictures of arctic foxes, seal cubs and polar bears strike the heart. It is an homage to life in the toughest and most unforgiving, but also the most beautiful and fragile of worlds.

A Danish Designer was This Year's Winner

The seminar was concluded by this year's winner of the Focus Foundation's award, the Nordic Award, Anne Damgard, telling and showing pictures of her sensational creations. An award she received the day after the lecture. Her haute couture creations are suggestive and very sensual and she is very skilled when it comes to handicraft. The female body is the starting point and it is reinforced by the choices of transparent materials.