It started out as a research collaboration between the University College of Borås and the oldest university in Indonesia, the Gadjah Mada. But today the project, 'Waste Refinery Indonesia" is Sweden's biggest commitment in Indonesia, and is so important that even Foreign Minister Carl Bildt commented on it during his visit to Indonesia this spring.

"What's unique about this collaboration is that it is based on a university initiative and that it is applicable at a local level", explains Linggawaty Hakim, Indonesian ambassador to Sweden.

Along with several representatives from the Indonesian Department of Foreign Affairs, she is visiting Borås and its recycling facilities in order to, on site, learn about strategies for various kinds of waste management.

"The first and most important part of our work is raising public awareness about the potential of recycling in Indonesia. Through social processes we will be trying to break habits and get people to start sorting and recycling. They have to realize that theyselves will be the beneficiaries of a spared environment as well as of gas extraction from waste", Says Linggawaty Hakim.

Mohammed Taherzadeh, who is a professor at the University College of Borås as well as one of the initiators of the 'Waste Refinery Indonesia' project, believes that this visit is one in a series intended to make more politicians in the Indonesian government to engage themselves in issues of environment and waste.

"Early on, we understood that Indonesia had great need for knowledge and technology to handle waste", he explains. "Our contribution is education, creating openings for research and supplying technology.

"Indonesia is the first country where we have come down to concrete measures", says Mohammed Taherzadeh. In reality, the whole of southeast Asia is a problematic area when it comes to waste management.

"We want to contribute with technological and knowledgeable development in global environmental work", says Olle Engström, the Moderate Party representative in the Borås City Council. He is also one of the initiators of the collaborative project.

"We have a solution to the problem and now we want to share it with others", he says and adds that what he feels has been of importance in the work so far has been getting people to realize the extent of the Indonesian problem with waste management. It is a matter of contaminated water destroying both the environment and people's health.

In October Olle Engström and Mohammed Taherzadeh will go to Indonesia to, on site, monitor development in the eleven cities that have made efforts to manage waste according to the Borås standard. Linggawaty Hakim explains that another objective with the project is gathering knowledge and technical support to open up for Swedish investments and mutual advantages from the collaboration.

"Indonesia has good natural resources, we have a powerful work force and waste from 250 million inhabitants. It is possible that we are going to be able to make cheap biogas for Sweden too."

The UCB will be monitoring the waste management project in Indonesia this autumn.

The image below shows representatives of the Indonesian government, of the University College of Borås, of the City of Borås as well as of the Technical Research Institute of Sweden. 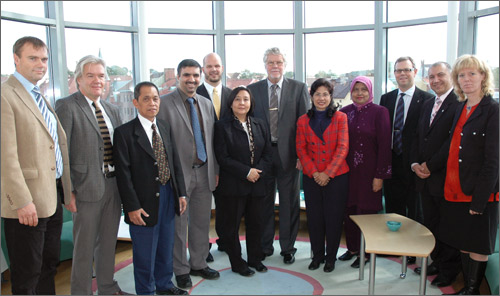