The Swedish School of Textiles and Smart Textiles Works with NASA

A unique collaboration between NASA, Chalmers, Smart Textiles' Prototype Factory and the Swedish School of Textiles has seen the development of a full-scale space habitat. On Monday the 4th of May the “Space Habitat” exhibit was opened in Nordstan in Gothenburg.

In order to test the everyday life of an astronaut in preparation for trips to Mars, NASA wants to build a habitat on the moon. The full-scale model built by Chalmers in cooperation with the School of Textiles and Smart Textiles' Prototype Factory, is intended to give the visitor a feeling of an astronaut’s everyday life in the future. The project is Chalmers’s contribution to the International Science Festival Göteborg.

Smart Textiles’ Prototype Factory and The School of Textiles was asked to develop the textile shell surrounding the habitat. “The textile piece, eight and a half metres in diameter and three metres high, is made of polyester with a plated inside,” says Stig Nilsson, who along with Magnus Bratt was in charge of the School of Textiles’ work during the eight week time span.

”We have never done anything like this before, so it was a fun and creative challenge,” Stig Nilsson continues.

A Lot of Cooperation Partners

Working on the textile has meant a lot of work with several people involved. Students from Textile Product Development with Entrepreneurial and Business Development did the preparatory work and trial weaving with technician Tommy Martinsson. The company ACG Nyström supplied a machine for welding the seams, and ex textile engineering student Sara Almgren sewed together the 30 segments to five modules which were finally mounted on a shell.

”The fabric fits perfectly, so now our work is done. On Monday I am going to Gothenburg to enjoy the exhibit,” Stig Nilsson summarises. 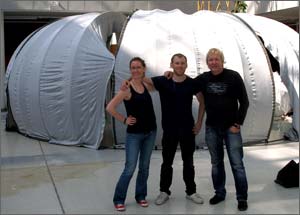 International Science Festival Göteborg takes place between the 4th and the 10th of May. The programme for the festival is available at 200 locations around Gothenburg or online at www.goteborg.com/vetenskapsfestivalen

The ”Space Habitat” exhibit opened on Monday the 4th of May in Nordstan, by Åhléns, behind the tourist agency. Read the blog about “Space Habitat” at www.boplatsrymden.blogspot.com (only in Swedish).