Orange peels lie behind the first patent application from the University of Borås in Sweden. It was recently submitted via Inicia AB to the Swedish Patent and Registration Office. Now Professor Mohammad Taherzadeh is hoping for a green light for a patent to cover part of his research. 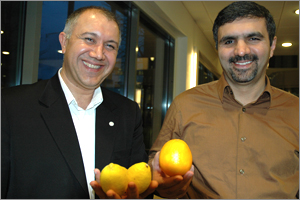 Mohammad Taherzadeh and his research team at the School of Engineering have attracted considerable attention in recent years for having succeeded in producing ethanol and biogas from different kinds of waste.

“Many different materials have been used in the process, but we have chosen to focus on a small segment of the field, specifically citrus waste,” explains Daniel Yar Hamidi, CEO of Inicia, as the university calls its holding company.

The objective is to be able to commercialize the method of producing four products out of citrus waste: limon (an antibacterial agent), pectin, biogas, and ethanol. Citrus waste is not suitable for burning since it contains too much moisture. Nor is it good for putrefaction or composting due to the antibacterial substance.

“We want to protect our knowledge under a patent, but at the same time we also hope we will be able to share our know-how via sales of facilities or licensing the process,” says Mohammad Taherzadeh.

Since 2005 he has been working with orange peels as a raw material. The project has been funded by the Föreningssparbanken Sjuhärad Foundation, the Swedish Industrial Design Foundation in Sjuhärad, and Brämhults Juice AB, making it possible for four doctoral candidates and a number of master’s theses to develop the process.

Both Mohammad Taherzadeh and Daniel Yar Hamidi are convinced that it will be possible to sell this type of knowledge abroad, especially in countries with a warm climate and citrus cultivation.

“In such places there is an even greater need for this type of facility. In Borås we have about 10,000 tones of citrus waste per year,” says Mohammad Taherzadeh. He adds that much work remains to be done when it comes to managing waste.

“We need to be even better than we are today in Sweden. If we do it in the right way, we can sell our knowledge as an export and at the same time improve the global environment,” he continues.