Chinese week at University of Borås that lasted from March 9 to March 13 has come to end. The opening ceremony was held successfully the first day in the main entrance of the library when more than 50 students and teachers attended.

With the Chinese national flag and traditional Chinese music in the background, International co-ordinator Douglas Washburn and President of Student Union, Studentkåren, Lars Hedegård gave the opening speech. Following that, the Chief Organizer Hao Shijie along with all the Chinese students who had joined this big activity came to the platform to thank everybody’s attendance.

A range of topics

There were different topics every day. Visitors could take part of everything from traveling and shopping in China, Kung fu and customs (wedding, festival and New Year) to Chinese students’ University life and the Olympic Games. The theme of the first day was Chinese food and art which was introduced through five dishes displaying Chinese food, a performance of a tea ceremony, a painting performance, handicrafts and hangs and a multi-media and pictures show. During the week there were also two movie nights where about 60 students came to watch.
– The last movie night was touching for many students. They were still immersed in the feeling of movie and stayed after the movie ended, says Hao Shijie.

The Chinese week had successfully given a general impression about Chinese Culture and modernity.
– Most students said they would like to travel to China in the future. Some even wants to learn Chinese and work in the 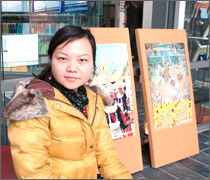 The activity gained a wide support. Not only from the university and the Student Union, but also the Chinese embassy in Sweden, consulate general in Gothenburg, and lots of help from teachers and foreign friends.