This week two and half a years at the University of Borås comes to an end for the student Venkata Prabhakar Soudham from India. He takes the next step in his research career, going to a Phd position at the Umeå University where all the research work will be carried out at SEKAB Örnsköldsvik, Sweden 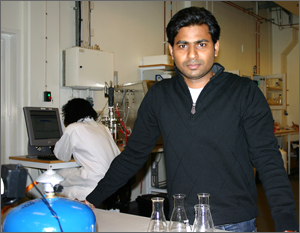 Venkata Prabhakar Soudham, started his MSc studies on the two year study programme Resource Recovery – Sustainable Engineering in 2007 and completed it in 2009. Then he was enrolled on a project on Biofuels production under the supervision of Professor Mohammad J. Taherzadeh.

"From my education at University of Borås I got the opportunity to go on a step closer to my goals under the supervision of Professor Leif J. Jönsson. I will carry through my research project at SEKAB E-Technology in Örnsköldsvik, Sweden. SEKAB was founded in 1985 with the aim to develop technology for cellulosic ethanol production. And the SEKAB group is one of Europe’s leading ethanol producers. This is a great opportunity for me".

Venkata started the master studies at the University of Borås after he had completed a B.Tech in chemical engineering at the Jawaharlal Nehru Technological University Hyderabad, A.P, India.

"Already at high school before I started my university studies I was quite good at mathematics and chemistry and I knew from the beginning that I wanted to become a researcher. For a start I was interested in chemistry and chemical technology. But during my studies I found that biofuels were really interesting. I looked for an opportunity to carry on my studies in the field of biofuels".

Venkata searched for a suitable education programme and found an interesting one at the University of Borås in Sweden – the two year MSc study  programme in Resource Recovery & Sustainable Technology.

"Increasing the global warming and decreasing the oil reserves has attracted both the scientists and businessmen to develop the renewable fuels. In Europe Sweden is one of the most effective countries that has been working on biofuels with the aim to avoid the usage of fossil fuels by 2020. And University of Borås has been taking a part in this development with an intensive research at the university lab. This ambition has strongly motivated me to get my higher education in Borås".

In the end of the master studies Venkata Prabhakar Soudham has been engaged with a project as his master thesis at a university in Cuba about the pretreatment of lignocellulosic materials for ethanol production. After the MSc study programme he was enrolled on a research project at the School of Engineering, University of Borås, to design a nutrient composition, particularly vitamin addition, for yeast production, as in industrial ethanol production it will be necessary to use a large amount of yeast.

"I have become deeply interested for further research in the field of biofuels after my education at the University of Borås".

"I did not have enough skills from my education in India to stand in global competition. And nowadays the global competition for talent has been increasing rapidly. During my education at the University of Borås I have developed my personal and social skills to go for a global career. The University of Borås has provided me a good research environment to improve my skills towards a scientific career. I am really thankful to the University of Borås and all the professors who created a friendly environment, supported and guided me towards my goals. Now I am feeling really sad to leave all my friends over here, and I am leaving with many good memories which will be along with me forever".