Soon You Will Be Able to Play Music with Your Clothes

In the future, touring could be much easier for musical acts. Jeannine Han, on her second year of the master programme in textile and fashion design at the Swedish School of Textiles, and technician Dan Riley, have developed a piece of clothing that plays music when someone touches it.

During the exhibit ‘Fashion – 300 Years of Clothes’ at the Nordic Museum, Smart Textiles has been invited to show the textiles of the future on the theme ‘Functional’. Jeannine Han, who is sponsored by Smart Textiles, has fashioned a suit that will surprise the museum’s visitors. “The suit is made from fabrics with integrated sensors that react when someone comes close or touches it,” says Dan Riley, the man behind the technology.

Jeannine Han also finds aesthetics important, and has spent a lot of time developing the pattern. She was assisted by the Göteborg Remfabrik, which provided material for the suit.

They call the project ‘textile design for a nomad.’ “The suit is for a traveling nomad who wants to communicate with other nomads, so the sound has been inspired by nature,” says Jeannine Han. Dan Riley continues: “It sounds like a harp, so our next step is to find a way of controlling the music more.” 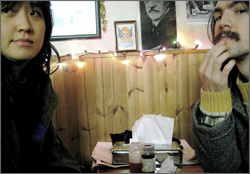 For her degree thesis Jeannine Han, with Dan Riley, is starting a band where one or a few of the members wear the suits and thereby play themselves. “We also want to develop the technology, so that manufacturing the suit will be easy in the future,” concludes Jeannine Han.

Jeannine Han’s and Dan Riley’s suit is on display at the Nordic Museum in Stockholm until June 2010. Read more about it here.

See a clip on how the suit works.