For a week, a fourteen person strong delegation from Nigeria visited Borås. The theme was ‘Waste Recovery,’ ie. how to make something useful from garbage, which was a concept that greatly impressed the visitors. “A brilliant idea,” says Naomi Chukqumaeze, the Nigerian ambassador to Sweden. 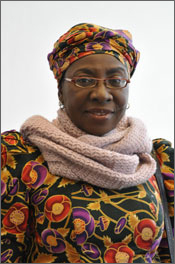 An eventful programme had been prepared for the delegation, consisting of representatives of four universities, the National Universities Commission of Nigeria (the equivalent of the Swedish National Agency for Higher Education) and the ambassador between the 8th and 12th of November. During their stay, the group visited Sobacken, Borås Energi, SP Technical Research Institute of Sweden, Ericsson and Navet. They met representatives of the University of Borås, the City of Borås and of local business. A workshop about Waste Recovery was also arranged.

“I was at once captivated by the concept. During the week in Borås I have learnt a lot about waste. In Nigeria waste is a problem, not least in the bigger cities,” says Naomi Chukqumaeze.

“It is a wonderful idea, not just collecting the garbage, but making it into something valuable. The idea must be spread, garbage is a big problem in the world, not least in developing countries.”

This spring, representatives of the University of Borås went to Nigeria to explore the opportunities for cooperation on research and education at different seats of learning. The visit garnered such interest at University Commission level that there was a desire to make a return visit to Borås, to find out more about the cooperation on resource recycling, Waste Recovery, that is going on between the University of Borås, SP, the City of Borås and Borås Energy & Environment.

The National Universities Commission has encouraged Nigerian universities to take up education in resource recycling. Four of them have now decided to do precisely that and want to send master and research level students to Borås to be educated within the terms of the newly signed cooperation agreements. That means that master and research level students from Nigeria might come to the University of Borås in the autumn of 2011.

“This is a good thing, it means that fees are coming in, and it also leads to a development of knowledge that both the university and the city can benefit from,” explains Hans Björk, head of education at the School of Engineering.

So far there hasn’t been much in terms of exchange between Nigeria and Sweden, but that could change in light of the week in Borås.

“I hope we can extend our cooperation. There are plenty of good opportunities for Nigeria and Sweden, I am sure of it. This opportunity is too good to pass up,” says ambassador Naomi Chukqumaeze.

Hans Björk too, sees the opportunities, for example the exports of Swedish environmental technology.

The Nigerian students that are sent to Borås will have their studies paid for through scholarships in Nigeria. They will otherwise be subject to the same application procedures. The research students that come here to follow the recently established research programme in Resource Recycling will be so called sandwich doctoral students, which means that they will spend half of their university tenure in Borås and half in Nigeria.

Ambassador Naomi Chukqumaeze has not been in Sweden for long, she took on her assignment in August of 2010. Her first impression of Sweden was that it was a highly developed country, especially in technology and communication. It is also a country that protects human rights. But what surprises the ambassador is the shy attitude among Swedes. “You have plenty of advantages here in Sweden and you are good at sharing, but you have to become better at sharing that fact,” she smiles.

She is also impressed with the environmental attitude in Sweden, especially the holistic approach of the Waste Recovery project.

“You not only take care of your garbage, but make sure that you find use for it. That is incredibly valuable in my opinion, and something I will bring back home.” 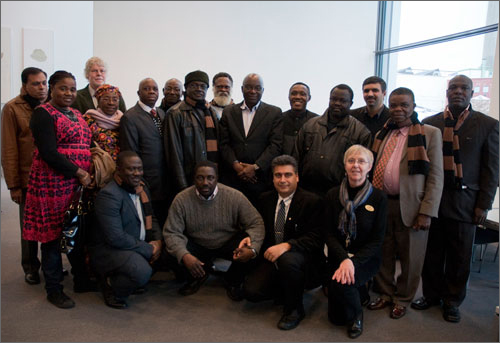