In August, the graduating class from the Bachelor programme in Fashion Design at the Swedish School of Textiles made success at the Stockholm Fashion Week. This week the class reunited to make history in London. Never before has a Swedish design school been represented at a fashion show abroad. And when the models wearing the Swedish students’ clothes entered the catwalk at Vauxhall Fashion Scout on Tuesday, it was the first time ever that the Swedish School of Textiles was present at the London Fashion Week. So this week’s show was unique in more ways than one.

Journalists form some of the world’s leading fashion magazines occupied the first couple rows at the catwalk in Freemason House in Covent Garden. Elle had sent seventeen people and Vouge had sent twelve. There were also representatives from Vivienne Westwood present to watch the Swedish School of Textiles’ fashion show.
– This is a remarkable achievement and an important acknowledgement of the work we do, says Erik Bresky, Head of Department, who had travelled to London to witness this historical event. 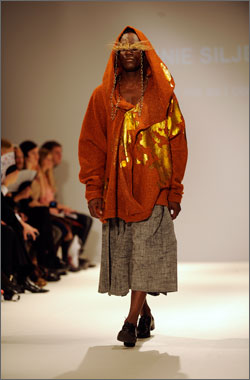 The eleven fashion design students who took part in the show have been working hard all summer. In June they held their annual fashion show in Borås and in mid-August they travelled to the capital of Sweden and showed off their designs at the Stockholm Fashion Week.
– The whole class has worked very hard at marketing the Swedish School of Textiles, says Sara Andersson, one of the graduates, who had taken time off her work at Lindex to be present in London.

All in all, there were more than 200 people in the room during the fashion show. The photographers were snapping away and all the journalists were busy taking notes. After the show, the audience was greeted by eleven, very happy, Swedes.
– Backstage things were incredibly hectic just before the show, but we remained calm. After all, we have done this before, says Sara Andersson and Jennie Siljedahl before they rush off to celebrate this amazing achievement. 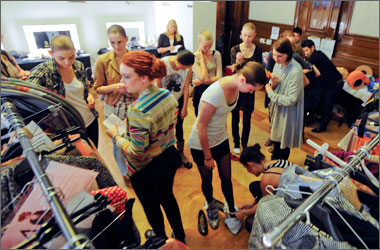 The Swedish School of Textiles fashion show was made possible thanks to contributions from many different organisations, most notably Sparbanksstiftelsen.