The First Pilot Facility Based on the Borås Model Inaugurated

Each day, tonnes of fruit were thrown away at the fruit market in Sleman, Indonesia. But that is no longer the case, thanks to Borås. These days, a biogas facility turns the previously useless waste into electricity. Thursday the 10th of February saw the inauguration of the first pilot facility created by the actor cooperation partnership Waste Recovery. “Borås is a role model and what you’re doing will benefit all of Sweden,” said Ewa Polano, Swedish ambassador to Indonesia, at the grand opening in Yogyakarta. 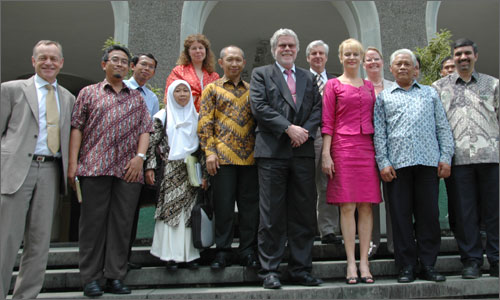 Many of the Swedes and Indonesians that were involved are seen here with ambassador Ewa Polano shortly before inaugurating the pilot facility.

On Thursday, hordes of press and several hundred invited guests came down to the fruit market in Sleman, part of the million-man city of Yogyakarta. In temperatures of around 35 degrees, the invited guests sought shade under an enormous tent to celebrate the event, but above all to be witness to the opening of the pilot facility for turning the peels of rotten fruit into biogas, and from that into electricity, which the local merchants can use. This facility not only decreases the green house gas emissions, but also makes the merchants self-sufficient when it comes to electricity, which they now entirely produce themselves. 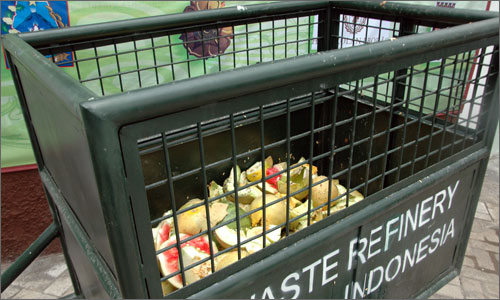 The waste fruit is carried on carts to the biogas facility itself. Around four metric tonnes of fruit waste can be refined per day, generating 350 cubic metres of biogas.

2006 saw the start of cooperation between Borås, represented by the University of Borås, Borås Energi & Miljö and SP Technical Research Institute of Sweden, and representatives of Yogyakarta, headed by the Gadjah Mada University, the fruit merchants and the city’s governing board. The pilot facility that now stands ready is living proof of the fact that very small means can lead to big changes, improving the environment and living conditions. That is the point of the Borås model. It is a success concept that has attracted attention from all over the world. Garbage and waste constitute a growing problem, and in many parts of the world people are drowning in garbage.

“This is a good example of what we can achieve together, and it shows that change is possible. We are proud to be share our experience from Borås and it is an honour to take delight with you today,” said Olle Engström, project head at the University of Borås as well as Borås politician and initiator of the successful Borås model.

An entire delegation from Borås attended the inauguration on the other side of the earth. All were agreed that this is not a case of foreign aid, but rather of a win-win situation for all involved.

“We work for a better environment. Environmental problems know no national borders. We’re generating international and experience,” says Gunnar Peters, President at Borås Energi & Miljö. He points out that his organisation hasn’t invested any money in the project. It has been partly financed by the Swedish Agency for Economic and Regional Growth, and by the Gadjah Mada University as well as the fruit merchants. In all, the pilot facility has cost around 2.4 million SEK. Gunnar Peters sees nothing but opportunities for Borås.

“I can see the development of smaller container sized units, preferably in Borås, but for easy transport to where they’re needed.” 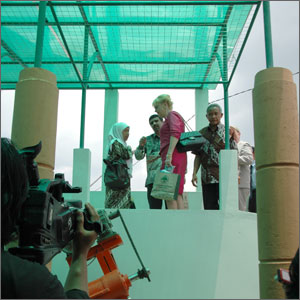 University professor Mohammad Taherzadeh showed Ewa Polano the pilot facility. The press interest was great, and each step was followed by more than 20 journalists. “We want to create a better environment in the world and growth in Sweden,” says Mohammad Taherzadeh.

A condition for the project is partnership and education. The head of the initiative and the agency staff involved have been educated in environmental issues. Pär Carlsson, who also works for Borås Energy, has been one of those responsible for educating the staff that will run the facility. He has also quality assured the documentation so that it is clear who does what, who owns the facility, who runs it, maintains it and who is responsible for paying for things that might occur.

“That’s a requirement for the continuation of the project, even after we hand it over,” he says.

Annika Siwertz, representative of the Swedish International Development Cooperation Agency in Indonesia, says that the Borås model is one of the best examples of foreign aid that she has seen.

“We have put in only limited amounts of money. The actor cooperation has been handled perfectly, thanks to key people like Olle Engström and Mohammad Taherzadeh. This is about paving the road for partnership. The method of involving university, city and business is one of the success factors.”

Ewa Polano is also pleased, and hopes that the Borås model creates rings on the water and generates more cooperation projects.

”This is exactly the way the Swedish government and Indonesia want to see a cooperation project. An exchange of experience, knowledge and partnership, where problems are solved together.”

During discussions ahead of the inauguration, she revealed that she would like to see Yogyakarta as a future environmental city in Indonesia. The sultan of that district was also to be present at the ceremony, but had to cancel at the last minute. His replacement joined Ewa Polano in pushing the symbolic button that started delivering electricity to the market. 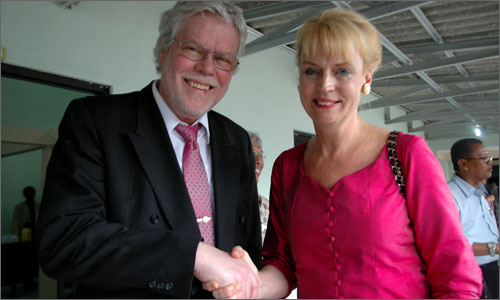 Olle Engström is one of the key people in the development of the pilot facility in Indonesia. Both he and the initiative were commended by Swedish ambassador Ewa Polano.

Since the 1980s, Borås has been striving to be a role model in waste management. Today, recycling is in place, biogas is, for example, taken care of in the old waste management facility Sobacken. That biogas now fuels 60 local buses. The University of Borås has several courses in waste recycling, and was granted the rights to issue research programme degrees in the field of resource recycling in 2010. Behind the Waste Recovery project stand the University of Borås, the City of Borås, SP Technical Research Institute of Sweden and Borås Energi & Miljö. The concept is based on engaging and involving the university, local government and the business sphere in the work, both in Borås and in the cooperating cities. This provides a long-term sustainable solution. A desirable objective is a more economic society when it comes to resources, a society not dependent on fossil fuels.