Crossing the Border Between Beautiful and Ugly

What is ugly and what is beautiful? Are there limits or it is in the eye of the beholder? A selection of students from the textile design programme were challenged to take what is ugly to its limits at the exhibition (Un)beautiful Textile. On the 20th of January there was an exhibition at Galleri KG52 in Stockholm. “At the School of Textiles, we know design and we want to show that even beyond Borås,” says head of education Tonje Kristensen. 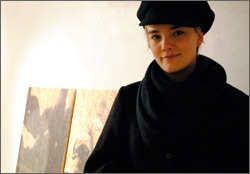 A lot of interested visitors attended the opening on Thursday afternoon, families of the exhibitors as well as an interested general public. Even students from schools in the Stockholm area were curious about the exhibition and the School of Textiles. From Nyckelviksskolan, a group of students came early to watch the lamps, wallpapers and patterns, all manufactured with different methods and techniques.
“I am curious about the textile design program and was advised by our teachers to come to the show,” says Lisa Nilsson, who is enrolled on a one-year textile education.

She fell for Linn Eketrä’s "Luxurios Leftovers" and Johanna Ågren’s "Deliberate Distortion" in particular. What interested her most were the materials, the colors and the texture, not whether it was beautiful or ugly. 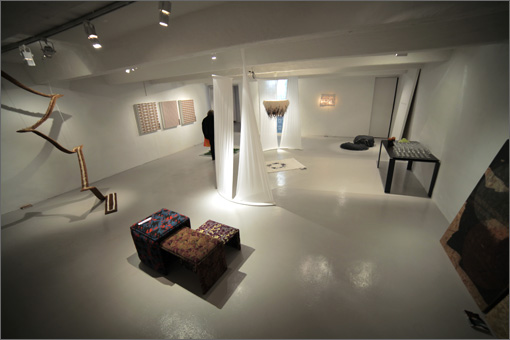 The Exhibition a moment before the opening. 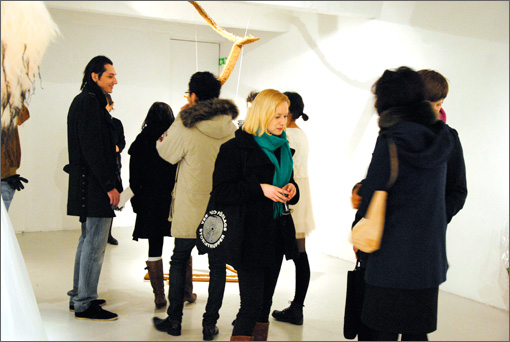 Linnea Nilsson, a first year student at the textile design programme, has designed three different patterns, which she has placed on three cabinets. The inspiration for the patterns comes from something that is far from beautiful.
”Since I don’t think about whether something is beautiful or ugly, and think it's a matter of personal taste, I had to think even more in this project. I wanted to find something that 99% of people find disgusting and concluded that vomit matches that description.”
To get a sense of ‘real barf’ she simply mixed together a blend of different foods. The shape formed by vomit, she has used as the base for patterns and placed on cabinets.
“I want to get people to think and not judge so quickly. Now they look at the pattern and they might think it is beautiful. When they open the cupboard, they will see the actual pattern, which is pretty disgusting.” 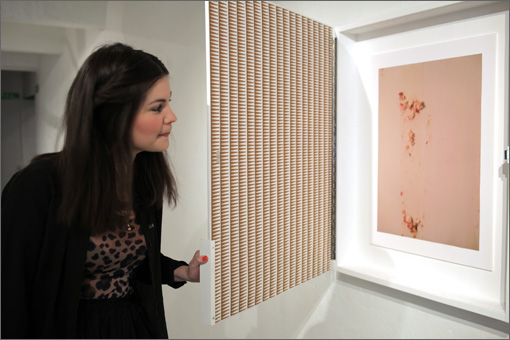 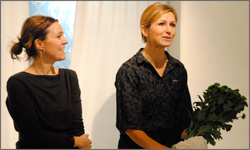 This is the first time the textile design programme puts on an exhibit at Galleri KG52. For the students, working on an exhibition provides invaluable knowledge. The idea is to also reach a wider audience and get potential students in the Stockholm area to open their eyes to the School of Textiles.
“The exhibition will reflect what the Swedish School of Textiles is good at, as well as the scope of the textile design programme,” says Tonje Kristensen.

The idea for the theme (Un)beautiful Textile came to School of Textiles Professor Marie Dreiman last year, when a masters student in textile design did a study on the border between the beautiful and the disgusting.
“She took pictures of mouldy mushrooms in the forest and the pictures turned out beautiful, but if you put the mushrooms in a room, they suddenly appeared ugly and disgusting. That is interesting and the question is: Is this because the right thing is in the right place, it is conditioned by culture? What separates something beautiful from something ugly?”ListenRead phonetically 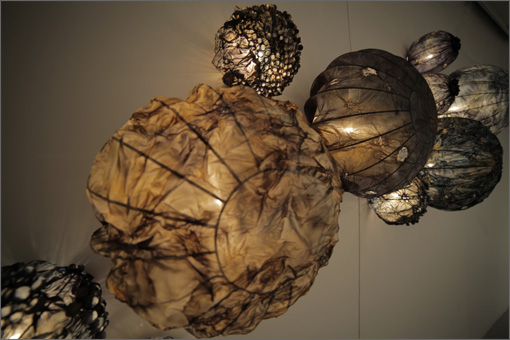 In addition to talking about the exhibition that appeard at the Stockholm Furniture Fair between February 6th and 12th, Marie Dreiman lets us know that an exhibit on the same theme is coming later this spring.
“We have a booth at the world's largest furniture fair in Milan between the 12th and 17th of April. A few selected students will be showing their material on the theme ‘Like Textile’ which is an independent continuation of this exhibition. It is going to be very exciting.”

The (Un)beautiful Textile exhibition at Gallery KG52, Kammakargatan 52 in Stockholm, was shown between the 20th  and 29th of January. See how students prepared for the exhibition and learn more about the Textile Design programme at textildesigners.se