Recycling concept to be implemented in Nigeria

The interest in the recycling of waste to energy has started to bloom in the spirit of the co-operation Waste Recovery in Nigeria. An investor who wants to start producing electricity from waste recently visited Borås to take a closer look at both large and small-scale recycling facilities. 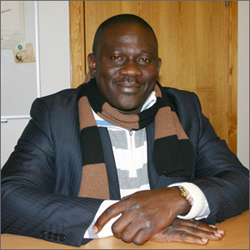 Last autumn, a delegation from Nigeria visited Borås to find out about opportunities for cooperation by Waste Recovery in Boras - International Partnership. Among the visitors was the civil engineering consultant and construction entrepreneur Mr. Michael Debiyi Adedayo. He saw potential in the concept of Waste Recovery and wanted to know more about different waste recycling facilities. Now he has met with Professor Mohammad Taherzadeh and Mr. Olle Engström, project coordinator, School of Engineering once again.
- I have plans to start a waste recycling facility for production of electricity from waste and is particularly interested to see how small facilities are operating, said Mr. Michael Debiyi Adedayo.

Mr. Olle Engström, project manager in Waste Recovery in Borås, took Mr. Michael Debiyi Adedayo to the group's partners, Biogas Systems in Sunne, where they are constructing a plant to make use of biogas from landfills to burn for production of electricity, and a facility in Åmål, for the production of electricity from sewage sludge. The visit shows the different options there are. They also visited the facility Sobacken in Borås which however, according to Mr. Michael Debiyi Adedayo, is too large to be the model for his idea in the present situation.

Unlike Borås, where vehicle fuel is produced mainly from biogas, Mr. Michael Adedayo Debiyi is interest in electricity production on a smaller scale in the capital of the State of Taraba in Nigeria. Taraba is located in the middle of Nigeria where they grow lots of fruit.
-Today, the Government of Nigeria has limited opportunities to generate electricity for consumption. I imagine a facility which recovers energy from fruit waste from markets and domestic waste from the city and produce biogas for electricity generation.
The rules in Nigeria are different from those in Sweden. There is no need to seek funding from the government to launch an electricity company.
-The only thing I really need help with from the government is to protect my business idea, said Mr. Michael Debiyi Adedayo.

Wants to sponsor a student

Now he is back home to draw the idea of a plant. Eventually, he intends on co-operating with local universities through an exchange of research, where researchers have access to his plant and contribute knowledge to streamline the production. He will also fund a master’s student through his company for studies at University of Borås. The student will then be able to operate the proposed biogas plant.
-This is a good example of implementation of the concept that Waste Recovery in Borås stands for, says Professor Mohammad Taherzadeh.

Footnote: Waste Recovery in Borås - International partnership is a co-operation between the University of Borås, SP Technical Research Institute of Sweden, City of Borås, and Borås Energy & Environment AB with the aim to exchange knowledge and experience to develop environmental, social and economical sustainable societies.