Just how unique was Astrid Lindgren? And was Pippi Långstrump (Pippi Longstocking) really the first free girl in Swedish children’s literature? Eva Wahlström, lecturer at the Swedish School of Library and Information Science at the University of Borås presents in a new thesis material and literature analysis that may change our image of Astrid Lindgren and Pippi Långstrump. 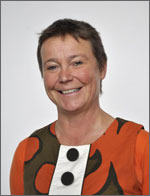 “We must give Astrid Lindgren her due, but she is not as fundamentally original as has been stated, and she is not alone”, explains Eva Wahlström.

Eva can also show clear examples of several predecessors to Pippi Långstrump, girls who were just as free and bold as the strong, kind-hearted girl with red plaits. But how many of us know who Ann-Mari or Bibi are? Because those are their names – characters in children’s books who were created as early as the 1920s and 1930s, and who are, as Eva Wahlström has demonstrated, remarkably similar to the infinitely more famous Pippi.

Eva herself has given several courses about Astrid Lindgren and has seen how the popularity of these courses reflects the special place Astrid Lindgren has had for four generations of Swedes. Jokingly, she wonders whether her thesis can lead to a charge of high treason against Sweden.

“I’m not interested in bringing Astrid Lindgren down from her pedestal, and I couldn’t do it even if I was. Her place is far too secure. And I don’t imagine my conclusions will cause Mr. or Mrs. Average to choke on their coffee. I do hope, however, that other researchers will find the similarities interesting”, says Eva Wahlström.

Surveys of Swedish children’s literature have always presented the year 1945 as the birth of the modern children’s book. It was in this year that Astrid Lindgren published the first of her books about Pippi Långstrump. The starting point of Eva Wahlström’s research was a suspicion that what she and everyone else had taught their students about the birth of the modern Swedish children’s book was incorrect. The literature surveys that all lecturers relied on at that time described children’s literature between the wars as wishy-washy, boring and poor quality.

Dedicated detective work and a lot of reading, however, provided evidence that there had been original children’s literature, even in the years before 1945. The doctoral thesis that is now being presented at the Department of Literature, History of Ideas, and Religion at the University of Gothenburg is entitled: “Free Girls Before Pippi. Ester Blenda Nordström and Karin Michaëlis: Astrid Lindgren’s predecessors”, and it will probably make a larger impression than many other theses.

Eva can demonstrate many common features between the Astrid Lindgren’s three narrative books about Pippi Långstrump and the three first Bibi books by Dane Karin Michaëlis that have been translated into Swedish, and four books about Ann-Mari by Ester Blenda Nordström.

“Ann-Mari and Bibi were not only just as free and bold as Pippi. They are also similar to her, both in what they do and how they, and the authors who created them, express themselves. The girls are cheeky, tell lies and have an eye to the main chance. This is what surprised me most – that the girls are so similar”, she explains.

There are other similarities between the books, and intertextual correlations are present on several levels, such as the relationship to school and the view of society. Eva is even more convinced today that Astrid Lindgren read extremely widely, and she is also convinced of the magnitude of Astrid’s significance, not least as a creator of opinion.

Astrid Lindgren is usually described as both a traditionalist and an original thinker.

“Actually, I don’t think it matters what I say, Astrid Lindgren will remain the icon she is. But it is possible that we have overemphasised her role as original thinker and played down her traditionalist side”, speculates Eva Wahlström.