Twice over for Japan

For the third time, Makoto Oshima, head of design at Toyota in Japan, came to The Swedish School of Textiles to find an intern for his company. This time around the choice was to hard, and for the first time Toyota welcomes two Borås interns. <br />“They were both very skilful and talented,” says Makoto Oshima.

During their internship, which takes place at a factory outside of Nagoya, the students from the Swedish School of Textiles will work on the development of textiles for car interiors.

“During their short stay in Japan, they are expected to develop a complete and useable product. At the Swedish School of Textiles, there are programmes that interest me, and our previous experience of cooperation with its students show that they’ve done a good job.”

During his tour of Europe, Makoto Oshima handpicks students from five different seats of learning, with different specialities, in Italy and France among other places.

At the Swedish School of Textiles, the annual Japanese visit provokes feelings of deep satisfaction.
“This is a good mark of our students’ knowledge of textile design,” says Tonje Kristensen, head of education at the Textile Design Programme.

“They are interested in both specific materials skills, which our students acquire here, and the application of those skills on textiles.”

In all, eight students at the Swedish School of Textiles had been selected to show their portfolios to the Japanese head of design. This time around two students were chosen, for the first time, in a move that was not planned from the outset.
“Our choice became to difficult in the end, and so, after lengthy discussions and phone calls to Japan, Toyota opted for both. We are extra pleased at that, of course. They have different backgrounds and will complement each other well,” declares Tonje Kristensen. 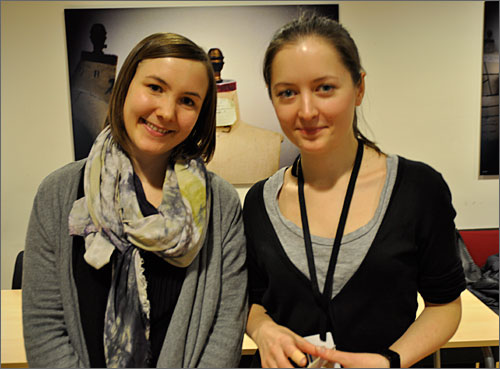 Evelina Tuvesson and Marta Kisand were the two happy students who were handpicked for the internship in Japan.
“What a great feeling! We leave on the fourth of July and stay there for nine weeks,” says Evelina Tuvesson who is on her third year at the textile design programme.
“We will be handed our assignment before we go to Japan, and they expect us to have ideas on how to proceed with our work from the second we land.”

“They want us to be inspired by Japanese culture, while adding a European perspective to our work,” says Marta Kisand, originally from Estonia, now on her second year at the master’s programme in textiles.
“The results we reach are supposed to appeal to both cultures.”

During their stay in Japan they will enjoy a week of travelling around to see more of the country. But after consulting students who have done the internship before them, the two students from Borås know that what lies ahead is weeks of hard work, which is something they look forward to.