During 2012-08-20--26, Rolf Appelkvist, Jenny Balkow and Grace Zhe Gu, were in Shanghai at University of Shanghai for Science and Technology (USST) to plan for a future engagement for the University of Borås (UB) in creating a European (excluding UK and Germany which have their own centres) or Nordic Culture Centre.

The week was very rewarding and despite of the heat (36° C one of the days) according to what the members of the group say. One outcome was that we again discussed whether a Nordic Centre wouldn’t  be more appropriate than a European; it would make more sense in an International Culture Park where there already are an American, a British, a German and a Japanese centre. We planned for renovation and furnishing of the house where the centre will be situated. We planned for organization, activities and made a first budget. One thing we learned was that their university in many respects is similar to our own regarding administration, economy and management. Of course there are differences too. 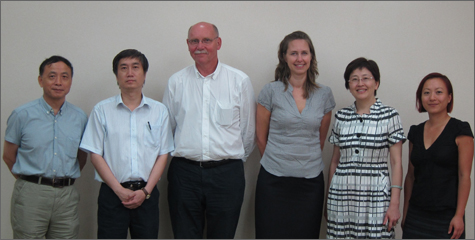 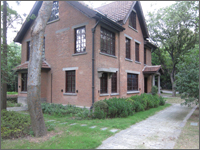 Shanghai City has allocated money to the USST to create an International Culture Park where from the start the idea was that the park should also contain a Swedish or Nordic Culture Centre. The centre shall disseminate knowledge of its´ region and its´ contemporary culture to students and staff at the university. Culture is regarded in a broad sense and could denote also such things as Business Culture, Work place Culture etc.

- That we are part of the Centre management is a great asset to the University of Borås, says Rolf Appelkvist. We have access to a node in Shanghai! Part of the present planning is to give a couple of students the opportunity to do internship at the centre. Students at the Event Management programme are in our minds for that. The School of Business and IT already has a well established exchange programme with USST and half of the students at the IMIT-programme will spend a year at USST as part of their studies. Now are exchange can expand even further and also include other schools at University of Borås. It is of course an advantage that teachers from our University will be at USST.