Now everyone can be a space traveler

As a child he wanted to see the Milky Way, but where he lived in Los Angeles, there was too much light pollution. Now he has developed methods for everyone to click their way through galaxies and solar systems via the internet. Curtis Wong is Principal researcher for Microsoft and an expert on creating interactive programs. 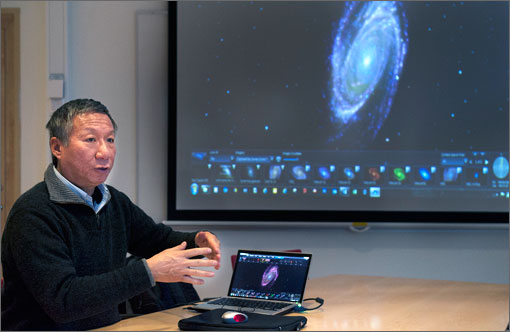 Curtis Wong has just visited University College of Borås and acted as Keynote Speaker at the School of Library and Information Science Jubilee conference. He is a highly acclaimed researcher with a broad knowledge of his subject and long-standing experience of leading various projects.

A special favourite is his space project, WorldWide Telescope, which makes it possible to experience the universe through the use of several senses, by zooming in and out of the galaxies and acquiring a lot of background knowledge of whatever one comes across. Opportunities seem endless in the largest existing image of the universe, made of a billion pixels.

“An advantage with digital information is that it is easy to connect different information sources, which increases both the knowledge value and accessibility. Imagine how much more can be learned when several senses are involved, so that you can build mental models of things experienced. This has been the thought behind the construction of my programs”.

Curtis Wong states that he has an active imagination and a broad field of interests which he combines with technical knowledge. Astronomy continues to fascinate him, and he is also a great lover of art. His methods for interactivity and visualisation were demonstrated for the first time in1995 on a CD-ROM with an art theme. Since then he has moved on to developing, among other things, WorldWide Telescope.

The first CD was called “A Passion for Art” and introduced the Barnes Foundation, an art-museum in Philadelphia.

”I used the same technique that I do now with the telescope, although for an entirely different subject” he explains. ”I think the best way to learn something is through narratives. That's why the CDs are filled with stories”.

At first it appears to be a documentary, but one soon discovers that there are loads of buttons to click to investigate things further. You can go on a virtual tour through the galleries of the museum, clicking your way to get a close up view of the works. You can find out about the background and life of the artist, see the documents and receipts from when the works were purchased, learn about Renoir's family history and hear the history of the establishment of the museum.

“People who have used the CD have contacted me and told me that when they visited the museum, they felt they had already been there. That is great. If one has acquired knowledge and information before seeing a work of art in reality the first time, the emotional experience will be more intense. Otherwise you can easily get tired when having to absorb so much of a museum’s collections during the one visit”.

Another project that Curtis Wong has been involved is Leonardo da Vinci's notebook, the Codex Leicester, through a program that shows art as well as calculations and information about the various elements of da Vinci's Life. In this project, he co-operated with a long-term colleague, Bill Gates, who purchased the notebook in the 1990s”.

“You can compare this technique to a guided tour, when you go by coach and have things explained to you, only here you can get off the bus where you like, maybe to investigate something, and then jump back on again. Or, you can change buses and begin a completely new guided tour”.

Curtis Wong also mentions project Chronozoom, an inter-active timeline for the history of the whole universe. Here, the idea is that everyone should be able to add their own time-lines and tours or travel around the ages as they like.

Broadening and deepening the subjects dealt with in the programs renders them accessible to a very large audience. With regard to the telescope, Curtis Wong tells us that it can be used by pre-school children and researchers of astronomy alike. It can elucidate many phenomena on earth.  The digital techniques make images surprisingly clear, the sound is amazing and the opportunities to add explanatory leads, tables, links to research journals and other sources, appear next to endless. The one-time little boy in Los Angeles has really succeeded in making the Milky Way reachable for everybody.

“My wish is to inspire others to investigate, to learn and involve themselves and to go on   developing existing techniques.  By tying together different information channels, you can really increase the information value. That is really something for libraries to make the most of”.