Multinational video conference with participants from 19 universities in twelve countries

Since the summer of 2010, the University of Borås is a partner in TOSCA, an Erasmus Mundus project covering central Asia. Nine students from that region are currently enrolled at the school. On the 20th of January, there was a video conference on Skype, featuring all 19 partner universities from all twelve countries. 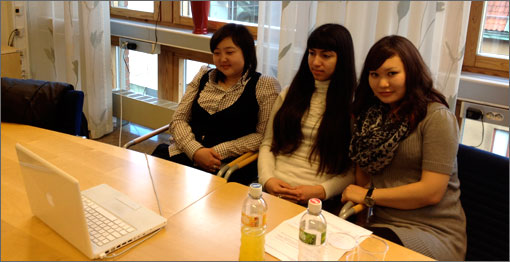 The conference was introduced by students from different EU universities talking about their experiences so far.

The University of Borås was represented by Elza Guilyeva, Diana Kim and Shinara Dauletbayeva who all study at the School of Education and Behavioural Sciences. They said that their English is improving day by day, and that they are sure they will acquire skills and experiences that will make them competitive on the labour market.

Want to affect development in their home countries

They also said that they are learning Swedish, that life is fulfilling and that they are happy to study in Borås. In general, the students in the project were grateful for the opportunity to study abroad and thereby help improve conditions in their home countries.

Since the autumn of 2011, nine TOSCA students study at the University of Borås. The students come from Kazakhstan, Kyrgyzstan, Tajikistan, and Uzbekistan.

All-in-all 100 students from Central Asia are enrolled at the seven EU universities in the project.