A stinking diesel engine heaves and pounds, it powers the machine that scales the bark from the thin tree trunks. In a big room next-door carpenters sit on the floor, some making chairs and shelves, others braiding imaginative braids.

Amanda Mellqvist and Sebastian Dahlström from Borås are in Kampot, a province in southeastern Cambodia, best known for its exquisite pepper. They are here to see small-scale growth of rattan, a bamboo-like wood, and to visit the factory where they make products out of rattan.

“This is our first time in Cambodia. This visit is fantastic in so many ways. What we have studied in the course we now get to see in real life. I was good combination of theory and practice,” says Amanda Mellqvist. 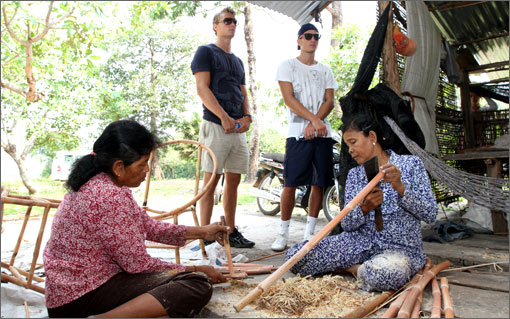 See how it works with their own eyes

The two of them are spending their 2012 spring term studying at the AIT (Asian Institute of Technology) in Bangkok, as part of the International Business Engineer Programme at the University of Borås. It is their fourth term. In all, there are 22 students from Borås in Bangkok. Most of the group is now visiting Cambodia as is part of the course on CSR, corporate social responsibility.

“Since CSR is so important, and will be even more important in the near future, we have placed this course in Southeast Asia. That is because we want the students to see with their own eyes how things work here,” says lecturer Roy Anderson, who is responsible for Campus Bangkok at AIT.

The WWF in Cambodia currently runs several projects aimed at creating sustainable production of rattan. Among the sponsors are IKEA. Work started due to the many cases of illegal deforestation, which is a big problem in the whole region. The effects in Cambodia of the devastation of large forest areas led species such as the tiger and the elephant to disappear - along with the tourists, who wanted to see a forest with animals and not just widespread barren land.

“The village we are visiting now is called Prek Thnot, and they have done well. There are guards in the forest. Production output is not huge but supports the families here in an environmentally friendly and sustainable way. Several animal species have returned and grown in numbers,” says Ratanak Ou, who is a project manager at the WWF.

Is no simple job to grove rattan: the sun burns, there are sharp thorns on the trunk, tearing up deep wounds. After the tree is taken down the wood is dried, the bark is chopped off by hand by the women in the village, and the men build chairs. Families in this village make about 500 SEK a month. There are also other economic motives for the villages: their rattan is bought by factories in the region for more large-scale manufacturing. One of those factories is in Veal Rinh. It is a fairly peaceful place with several large buildings and great piles of rattan are drying in the sun outside. The only thing disturbing the peace is the loud diesel engine. The rest of the production is by hand.

What's your impression of the visit to the factory?

“I'm surprised that it works so well after all. But I would really like to step into the factory and help! We could make work so much more efficient and we could also make sure that the workers didn’t get injured or wear themselves out. There’s garbage everywhere, for example. The flow through the factory could should be vastly improved,” says Sebastian Dahlström.

The workers at the factory are employed but lack contracts and insurance. If they hurt themselves or get sick they go without benefits or wage. On the yard there are workers who are sort of freelancers, over whom the factory owners hold no responsibility. They cut bark with sharp knives, several of them also have kids who work. Some of them are no more than 12 and run hide soon when the photographer wants to take their picture.

“They are only here playing,” says the female owner of the factory.

Many of the workers look very young?

“Yes, several of them would never work here if Swedish rules applied. That question we have discussed thoroughly in the course. Now, being here, you see that things are not black-and-white. Kids should of course not work. But several young people seem to come here after school with their parents to make some extra money for the family. It is a reality, they are poor. I think 16 years is an acceptable age for work. In Sweden you get to have a summer job from the age of 14. They could consider solutions where a company paid the family so the kids could go to school before they were old enough to work,” says Amanda Mellqvist.

What are you going to learn from this study visit to southeastern Cambodia?

“That CSR is difficult, but important. There is a reality for the people here that we might not have experienced before. Now we are able discuss the issue in another way. We have knowledge because we have been there,” says Sebastian Dahlström.

Corporate Social Responsibility
It is usually split into three parts: economic, environmental and social responsibility; both long-term and integrated into the business model. In Sweden it is common that companies define CSR work as something which is mainly about ensuring decent conditions for work in the chain of supply abroad, not something that affects employees in Sweden.

Today CSR and sustainability are seen as something which can contribute to increase profitability as it is seen as a way of decreasing unnecessary use of human as well as physical and economic resources, while optimizing use of available resources.

Rattan...
...is a bamboo like kind of wood that grows wild in Africa, Asia and Australasia. Rattan is a palm tree in the calameae family, of which there are about 600 species. In Cambodia, five of these species are used in production.