Innovative research can save lives

Being able to distinguish a blood clot from a cerebral haemorrhage can make it possible to save both lives and cerebral functions. Researcher Fernando Seoane has received funding to continue investigating the outcome of his findings. He is also working as an innovation inspirer for the NYFORSK project at the University of Borås, a function intended to spread knowledge of research results to the community. 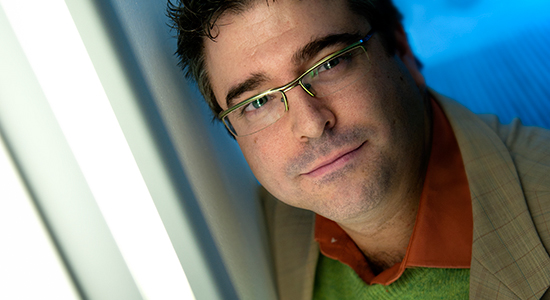 Stroke is a very common cause of death in society. People who survive often suffer permanently from brain damage. In order to minimize the number of deaths and injuries a prompt and correct diagnosis is imperative.

“A stroke patient who has entered hospital may have to wait until it has been made clear through X-ray whether it is a blood-clot or a haemorrhage that has caused the injury. The longer the wait, the greater the damage to the brain”, says Fernando Seoane, Senior lecturer in Medical Technology.

Fernando Seoane received funding from Innovationskontoret Väst of the Royal Swedish Academy of Sciences in order investigate whether the Electrical Bioimpedance Cerebral Monitoring method can be used to clarify what kind of stroke a patient has suffered from. This method is founded on a technique which is similar to the one used when measuring the proportion of bodily fat of an individual. A weak electric current is transferred through the brain to measure the resistance it is met with. Since different types of tissue conduct electric currents with varying degrees of velocity,  the hypothesis is that this procedure can be used as an indicator of the kind of stroke the patient is suffering from.

Facts about NYFORSK The NYFORSK-project stands for “utilization of research” and is the University of Borås’s contribution to a major project involving several academic institutions in western Sweden that are all linked to “Innovationskontoret Väst”. Each academic department has its own innovation inspirer, who co-operates with project-leaders, university administrations and Inkubatorn i Borås, in order to benefit from the research carried out by the university. NYFORSK can contribute with ideas, education programs and specified tools that will encourage researchers to work towards innovation and entrepreneurial undertakings. The project does not offer direct financing, but can assist  researchers in their quest for fund-giving institutions.

The method has already been tested on a small number of patients. In the course of the verification process, it will be tried on people who have already been diagnosed with stroke. If these results are successful, the plan is to proceed to using the method on new patients. The project will be carried out in collaboration with Karolinska sjukhuset, Karolinska Institutet, Harvard Medical School and Massachusetts General Hospital.  It is hoped that, ultimately, the technique will be ready to use within ambulance care.

In his capacity as Innovation inspirer at NYFORSK, which has been founded by the University of Borås as an attempt to make good practical use of research findings, Fernando Seoane will encourage researchers to initiate other forms of innovation and entrepreneurial undertakings. This can be in the shape of courses, ideas or the promoting of collaborations between researchers and Inkubatorn in Borås. The idea is to identify roads to making good use of other researchers’ findings.