Master student on internship at the UN on sustainable development

The master student Godswill Megwai got on an internship a close study on how the UN organization carry out the work of improving sustainable development. 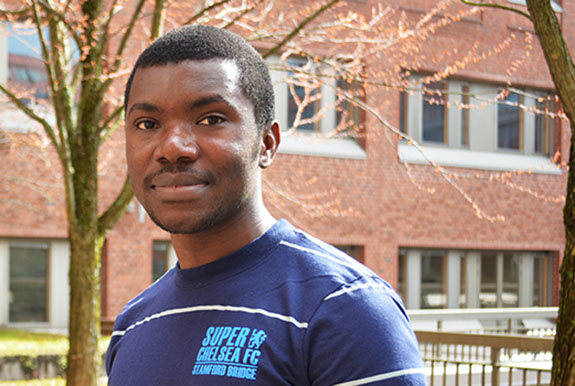 There are so many initiatives for improving sustainable development in the world and yet so few comes into force. This was the first thing that struck Godswill Megwai when starting the two month long internship at the Division for Sustainable Development at the UN in New York in February. Now he is back at the University of Borås to complete his master studies in Resource Recovery.

He came to study in Borås on recommendation from a friend.
−Actually my plans first were to focus my career on what everybody In Nigeria want, i.e. a career in the oil and gas sector. Then I heard about this master’s programme and about the focus on sustainable energy and waste management. I saw a future in this area. One day I want to make difference In Nigeria. We have a lot of oil and also a lot of waste, but we do not use the waste at all. And the number of energy production plants is very small.

It was on the studies in Resource Recovery in Borås he got the idea to apply for an internship right at the United Nations headquarters in New York.
He was really happy to be admitted to the internship at the Department of Economic and Social Affairs at the UN.
−I wanted to get a view of sustainable energy initiatives and see whether the initiatives in the Member States reach the set goals.
One thing he noted was that there is a lack of competence among engineers to influence the world.
−Engineering know a lot about inventing and develop new technologies in their specific fields but they lack knowledge of management technologies and economic management.

Godswill Megwai wanted to investigate how far the member states have come to put their hands on different initiatives and help forcing them to move forward. He presented to his supervisor at DESA how things are done in Borås, how different stakeholders such as the city, university, energy companies and research institute, co-operate to implement an initiative on waste management. In Borås city the goal is Zero waste and Zero fossil fuel.

On the internship Godswill Megwai has taken part in the production of a couple of articles as a co-writer and written two draft UN reports.
The first draft report was about the promotion of new and renewable sources of energy. It is a summary of the use of renewable energy for electricity and that be published in September.
The second draft report is connected to the Sustainable energy for all initiative. It is a summary of how the member states should carry through the objectives set by the UN to ensure universal accessibility of modern energy services, increasing the global rate of energy efficiency and increasing the share of renewable energy technology till 2030.
The third article is an overview of green economy initiatives in five countries on different continents.
−My objective was to identify if there are any national strategies for green economy concepts, policy options in driving the initiatives, if there are any implementation plans or tools for the initiatives and for evaluating the impact.
The fourth article is about Energy issues in Sub-Saharan Africa.

Wants to make a difference

Currently Godswill Megwai is carrying out his final thesis project at the University of Borås. He is doing a process simulation of a small sale biomass power plant. After completing the master studies he hopes to get admitted on a PhD programme with focus on sustainable energy matters and when having gathered enough knowledge and skills he would like to bring this back to Africa to make a difference together with people who want to invest in green energy or through politics.