He has already won the Danish competition Designer's Nest and received both TEKO's and H&M's awards for best collection. Now, fashion design student Andreas Eklöf has a chance to win again. 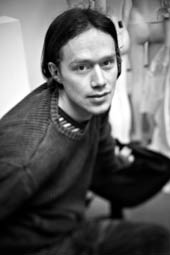 He is one of eight design students from all over the world who has reached all the way to the final stage of the H&M Design Award, and thus won 5000 euro. With his degree collection 'Expressions of tape', Andreas Eklöf, a Master's student at the Swedish School of Textiles, examines alternative expressions in outdoor fashion.

– I've used a method I call 'action taping', which is based on a very direct way of constructing prototypes of garments. The tape illustrates the way in which I've constructed the garments, but also the method itself.

During the semi-finals, his work impressed the jury, who considered the collection to be strong and well-worked.

– The competition is intense, and I'm very glad to see that The Swedish School of Textiles does so well in competing with major design schools from all over the world.

This is the first time that a student from The Swedish School of Textiles, University of Borås has reached the finals of the H&M Design Award. The jury consists of a number of fashion experts, among whom British singer Lily Allen may be noted. The first prize is 50,000 euro and a fashion show at Fashion Week Stockholm on the 27th of January 2015, when the winner is announced. The winner will also be offered a mentor, and H&M will make parts of the collection available in select stores and online this autumn.Watch the video clip with all the finalists