Biomedically active textile materials can assist in bone cell growth. This is presented in a research project carried out at the University of Borås. 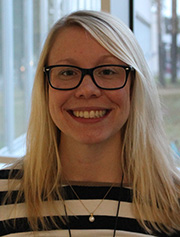 Maria Persson, doctoral candidate, has studied how biomedically active textile materials can be manufactured from functionalised polymeric fibres. By melt spinning polylactic acid (PLA) which has been modified with inorganic phosphate minerals it is possible to make polymer fibres which induce the growth of bone cells. These fibres are then woven into 3 dimensional textile structures, which act as substrates (scaffolds) on which the bone cells can grow, and form new bone tissue.