Clear out your wardrobe - save the environment

Do you know that you can drop off textiles for recycling at the university campus? There is a green container for this purpose in the car park behind Sandgärdet. Those leaving textiles here are doing a good deed for the environment, surrounding world and science.

A large number of resources such as water and chemicals are used in the manufacture of textiles. If you just discard unwanted textiles in the rubbish they will be incinerated, this will create some energy, but not nearly as much as required in production. One example of what is known as a waste of resources. 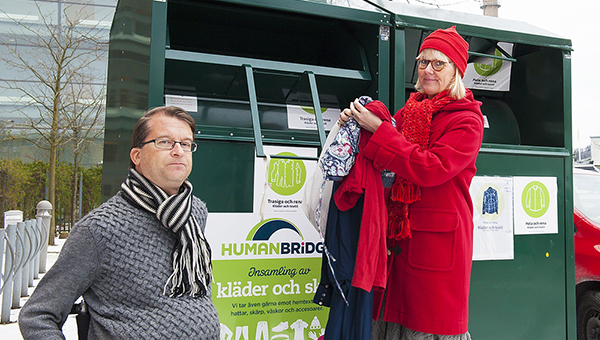 “If you reuse the textiles instead you can take advantage of the value of the raw material,” says Nicklas Salomonson, docent in business administration at the University of Borås and one of the researchers behind the textile container in the car park.

The trend of reusing and recycling different materials is growing and we collect increasing amounts of paper, glass, plastics and others. However, there is no convenient system for collecting and utilising textiles.

“Charities perform an important undertaking here, but other systems are also needed, for example, at municipal recycling centres,” says Karin M Ekström, who is a professor of business administration at the University of Borås and also an initiator of the textile container.

In a network that Nicklas Salomonson and Karin M Ekström have formed, the Network for Recycling and Reuse of Clothing and Textiles (NÅÅ), it has become apparent that even clothing companies are interested in collecting raw materials in return.

It is not so surprising. They tell us, for example, that studies show it takes up to 29,000 litres of water to produce one kilogram of cotton, which is about as much as is used in a pair of jeans. There are also signs that we are heading towards a shortage of materials, for example, cotton production will not be enough for all the textiles that are to be produced.

Torn clothing can also be recovered

“Often things are thrown away as the person in question does not know what to do with their old textiles,” says Karin M Ekström. If the clothes have spots that will not wash out or are broken, maybe they think they cannot be recycled.

Yet it is important to collect even broken textiles and not just throw them in the rubbish. The container outside Sandgärdet has two openings, one for unbroken and clean clothes and textiles, and one for clean but broken. It is therefore possible to leave all kinds of textiles, and even those that are broken.

Now, researchers are going to examine the qualities received through this type of collection at Sandgärdet, and how well the supporters sort the items in whole or broken textiles. Knowledge from the project can then form the basis of developing new systems for textile recycling, perhaps municipality led, or by different companies. Clothing and textiles are also collected at Gekås in Ullared, so that those who travel there to shop can take along their old textiles and leave them.

Researchers from the University of Borås are cooperating with Borås Energi och Miljö and the aid organisation Human Bridge. Personnel from Human Bridge collect, sort and document the content of the containers based on the quality and condition. Some garments are used again as originally intended, while others are used in other contexts.

“Some of the clothes go to the second-hand market in Sweden or elsewhere in the world,” said Klaus Rosinski, chief operative officer at ReturTex where Human Bridge is a partner. Some items are used as aid via one of our partner organisations. Others are sold as bulk material in e.g. the automotive industry, mattress manufacturing or oil absorbents. Sometimes wool is respun and used to produce blankets and the like. The money we receive is used in our humanitarian projects.

But why do we have so much fabric to throw away?

“One reason is that we have small wardrobes in our homes,” says Karin M Ekström. We have nowhere to store things that might have gone out of fashion, and therefore we throw it away. And we consume a lot of fabric, as fashions change extremely quickly now and we have economic prosperity.

“Another reason is that clothes are so cheap and are not associated with environmental thinking,” says Nicklas Salomonsson. Perhaps it is easier to throw them away in the rubbish than to go off to the container.

Why have you started to research the recycling of textile?

“I have researched consumption and realised that there was relatively little research on the reuse and recycling of textile,” says Karin M Ekström. “It is important to increase this instead of discarding clothes. It is also essential to make it easier for consumers to act in an environmentally friendly manner. It is important that my research is meaningful and socially relevant.”

“Recycling and reuse are important social issues, and for that reason I want to study them closely,” says Nicklas Salomonson. “It is also interesting from a business administration perspective - what responsibility do clothing companies have? How do they contribute with solutions? Which business ideas are there in the field?”

Along with Daniel Hjelmgren and Eva Gustafsson, they form the project team at the university, which for a period of three years has worked on a project involving the reuse and recycling of clothes funded by the Swedish Retail and Wholesale Development Council in cooperation with Formas. Karin and Nicklas say that their actions have been influenced since they started the project. They have become more environmentally conscious and restrained in their clothing consumption.

“When I go into a clothing store now, I see large amounts of water in front of me,” says Karin M Ekström.