Ulf Johansson is very happy at his job where he gets the opportunity to immerse himself in exactly what he wants; everything from the factors that affect fuel consumption to how pharmaceuticals could be tested with fewer animal experiments. He likes artificial intelligence, golf and board games. 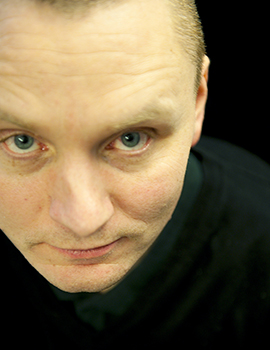 Why did you become a researcher?
"It was something that I gradually drifted into. I could have studied to become any type of engineer, but I chose computer engineering. Then I worked as a teacher here at the University of Borås where there is an excellent climate for evolving into a researcher. I wanted to do my doctoral studies in artificial intelligence, and was given the opportunity to do so. That was how it happened."

Do you have any role models in the scientific community?
"Yes, two people who I collaborate with: Lars Niklasson, who is currently Vice President of Jönköping University, and Henrik Boström, Professor of Computer and Systems Sciences at Stockholm University. I would like to have Lars's ability to attract funding and Henrik's scientific precision."

You are researching machine learning - what is that all about?
"It's about finding algorithms and methods for data analysis, so that the computers can identify useful patterns in large datasets." "The same techniques can be used in a diverse range of fields and projects."

Facts about Ulf Johansson:
- I am an Associate Professor of Informatics at the University of Borås.
- I received my doctorate in 2007 with a thesis on machine learning, as in how to programme computers to learn things.
- I first studied to become a Master of Science in Engineering in the field of computer technology.
- I became interested in computers in the early 1980s.
- I have worked at the University of Borås since 1997, when I began as a teacher of artificial intelligence, among other things.
- I use the internet page Google scholar to keep track of what is published within my field of research, and of course to see who has the good taste to quote my work.
- I participate, for example, in research studies about pharmaceuticals, about fuel consumption in trucks and about golf swings.
- I like board games involving a high level of skill because they are a way of socialising, but also for the element of competition and because they pose a challenge. At the moment I'm playing a lot of Pandemic, which actually focuses on cooperation, as in all players win or lose.
- My golf handicap is 6 and I used to play a lot of baseball.

In my spare time, I enjoy golfing and bowling. In addition, I play board games, support IFK Göteborg and spend more than a little time at the computer.

Can you name a few of these fields
"Absolutely! One example is an externally funded project that my research group is working on together with the pharmaceutical company AstraZeneca. We simulate how various substances and drugs affect the human body. One aim is to make some of the animal experiments used in the early development phases unnecessary, which of course would be fantastic."

Any more projects?
"Another project is to find what it is that affects fuel consumption in trucks, at a more detailed level than the obvious factors." "And to analyse the elements of the perfect golf swing."

What's the strangest thing you have done as a result of your research?
"Being called as an expert witness to the Supreme Court when they were deciding whether poker was a game of skill or a game of chance. I had made models of what it was in poker players' strategies that determined whether they won or lost, and had to explain this in court. The argument was that since my study clearly showed that the players' results could be explained based on their strategies, poker must be a game of skill. The court went with a compromise which says that poker tournaments are determined by skill, but single games are determined by luck.”

What is the best thing you've done in your work?
“It's that I've been a part of building up this research group that we now have here at the University. It's a strong team with great people and we conduct relevant and outreaching research with plenty of industry contacts and partnerships. We also have a clear international impact. It's fun! Now we have hired four new doctoral students who are wonderfully talented.”

What prejudices do you encounter regarding researchers?
“Some people have the prejudice that it would be worse to work at a university than in industry. And my parents think that I seem to have so much fun at work that they wonder if I should really get paid for such things; travel to conferences around the world, projects on interesting subjects and the like. It is true that I have a lot of fun at work and I really feel that I have ended up in the right place!”

What do you do in your spare time?
“In my life, work and leisure time are very connected, but I like many forms of sport, and playing board games. Up until a few years ago I played baseball, but now it's mostly golf, preferably with old-fashioned clubs made ​​of hickory wood.”