In a specially decorated intensive care room at the hospital in Borås, a study is being conducted on how the environment affects patients' experiences and recovery. Now a research group has received funding from the Swedish Research Council to develop the research on how health care environments affect the severely ill. 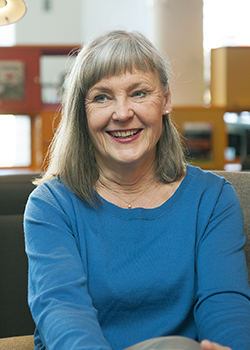 The room in question has space for two patients who are cared for by the same staff as in an ordinary double room at the intensive care unit.  Researchers compare the experiences of patients who have been treated in the special room with those in the ordinary room.

“Patients in intensive care are often kept partially anesthetised,” says Berit Lindahl, Docent at the University of Borås and leader of the research group, who works with several studies on health care environments. “It was therefore thought that they do not perceive very much of their surroundings, but it has been shown that they understand much of what is going on, seen and heard around them. Now we want to explore how to create environments that can promote recovery.”

Berit Lindahl's research focuses on place and space. She is also working on a project concerning children and adults living in their own home and receiving ventilator treatment.

The specially decorated room involves a change of sound, lighting and interiors. Instruments have been placed alongside the bed rather than at the head. The bed can be pushed in against a sort of headboard, rather than standing freely on the floor.

Textiles are chosen in soft colours and environmentally friendly materials. The number of stimuli is reduced, for example, the ceiling above the patient is plain and files are placed in a concealed shelf behind a whiteboard. Sound absorbers have been installed in the ceiling and walls.

“We also have an automatic control for the light. It is cyclic, in other words it follows and amplifies the day's normal rhythm,” says Berit Lindahl. A watch that the patients have on their wrist shows how much they move, at what time and in which light.

A few days after leaving the intensive care unit, the patients from both types of room are interviewed about how they slept and if they have experienced any nightmares – something that is common among ICU patients.

The research project is interdisciplinary and involves researchers within health care, textiles, and architecture at several different higher education institutions. The Swedish Research Council's grants now makes it possible to expand the project “Evidence-based design in high-tech health care environments – a challenge for the future”.