District as a living lab

Energy efficient housing, job opportunities, meeting places and integration - how can this be created in a troubled district? A problem the University of Borås intends to help to solve. Within the framework of a regional partnership the district of Norrby in Borås will become a living laboratory for research and innovation development. 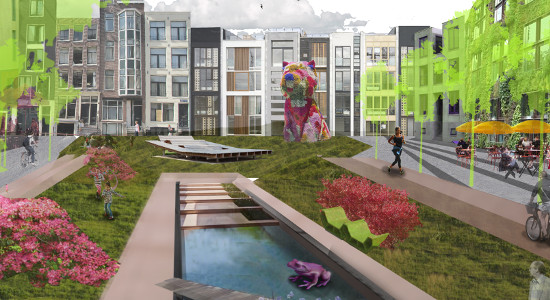 Norrby is currently a district in Borås characterised by unemployment, segregation and social exclusion. In principle the land between Norrby and the city centre is an untapped and geographically desirable area, which previously housed numerous factories. Borås Stad intends to build new housing in Nedre Norrby, while creating integration with the existing district.

- Borås Stad is building. “As a University we have a scientific commission, which also includes education and the distribution of innovation,” says Martin Hellström, pro-vice-chancellor of the University of Borås.

SP Technical Research Institute of Sweden and Borås Energi och Miljö are also members of the partnership with the University and Borås Stad and bring different skills and perspectives to the development of Norrby. The four parties already have a well-established collaboration. In the summer VINNOVA granted funds to create an innovation platform, a formalised collaboration for research and innovation regarding Norrby.

An important part of the project is to collect knowledge and increase the understanding of those who live and work in Norrby and to develop solutions together with them.  Citizen involvement and the bringing together of expertise from academia, politics and business are the basis of Living labs and Cultural Planning, two community development methods that permeate the project.

Practically, the project is divided into six work packages, which correspond to the challenges that have been identified. For example, one package is responsible for material issues, water and sanitation, another to develop business and ownership models, a third for a more energy efficient lifestyle and a fourth for inclusive citizenship. Also included is the work package to spread the results from the project and for the development of methodology, where Living labs and Cultural Planning are involved. Each work package includes representatives from the different partners. Researchers from the University lead three packages.

A particularly interesting factor of the Norrby project compared to many similar projects is that Boras is a medium-sized Swedish city. Comparable development projects are usually found in large cities.

“Equivalent challenges to those identified in Borås can also be seen in European cities of the same size. This means that the knowledge and solutions we develop can be of great interest both nationally and internationally,” says Martin Hellström.

In the same way that the different parties work intersectoral, even the University has an intersectoral approach in the project. Previous research in sustainable urban development has tended to solve one problem at a time - environmental problems, social fragmentation or insufficient financial resources. This project embraces all the dimensions of sustainable development and does not treat them as separate entities, but as an integrated whole.

She sees a challenge in allowing the different areas of research to preserve the uniqueness within respective fields, at the same time as the multidisciplinary dimension should give added value.

The VINNOVA funds are to be used to develop the platform and carry out the work packages over a two-year period.

“It’s an expressed aim that the innovation platform should grow and that we should seek funding for larger projects based on the ideas that materialise,” says Jenny Johannisson.

The undertaking of the University of Borås now includes a new master's programme in sustainable urban development and several interdisciplinary collaborations. Where the Norrby platform serves as a good foundation to build on.

What can the University’s research contribute with? Some comments:

“The tendency towards widening gaps between people is an enormous problem in society. In this project, we are working together to counteract segregation from different perspectives and to promote integration. This comprises everything from building materials to entrepreneurship, venues and education. Research is carried out in our department, among others, in inclusive citizenship. A part of this concerns children, youths and education. Another part is Cultural Planning and a third part the living conditions of the elderly. In this project, we take a holistic perspective. For example, I can contribute with my thoughts and knowledge about inclusion. The idea is that one plus one will make three.”

Jenny Johannisson, Lecturer in Library and Information Science, project involvement coordinator for the University of Borås.

“In this initial stage of the project, for example, our efforts are based on our previous research in Cultural Planning. It is a method and a perspective where you see a need to integrate culture through the whole development of society. The research carried out at the Swedish School of Library and Information Science is highly relevant in what we should do in Norrby. The citizens need the tools to become involved in order to grasp the opportunity to exert their influence. Here information is key, you need to know how to get the right information in order to influence. In time, our research in this field and Cultural Planning can have immense relevance to sustainable urban development, both in Norrby and in general. Libraries are our most visited cultural institution.”

“It is quite natural that the School of Engineering is involved when it concerns building or renovating in a resource efficient manner. We contribute with research and ideas in areas including structural engineering, energy systems and comfortable indoor environment. One idea is to build as much as possible in wood, as it does not have the same impact on the environment as other building materials.  This project will mean that those of us in higher education will come closer to each other’s disciplines. For example in the building programme, we will introduce the social dimension more clearly with respect to sustainability.”

“We work on three parts of the work package, where the University contributes with previous research. The first is the network that is created when constructing this type of district. The second is how to create housing that is financed in different ways, for example, both tenant ownership and rental, so that all types of private economy can be accommodated. The third part embraces workplace development, how to create conditions for business and enterprise that must exist in a residential area. An interdisciplinary approach is a prerequisite for this project. It becomes trivial to divide up a district based on individual elements. In time, this will translate into new knowledge.”