For the first time, the University of Borås has welcomed a student and two researchers through the Brazilian Science without Borders programme. We took some time out to meet two of them, Vinícius Ramos and Pedro Souza Filho, who are looking forward to an exciting stay in Borås. 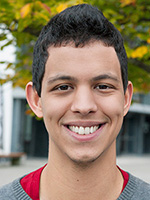 "I've always liked the Nordic countries, especially Sweden," says Vinícius Ramos, who is here to study on the Resource Recovery programme. "You have an excellent quality of life and a good education system, which is why I was keen to apply when I realised that I could come to a Swedish university through Science without Borders."

He is studying to be a chemical engineer in Brazil, but is particularly interested in waste management and how to turn waste into something useful. And this is where a year of Energy Recovery Processes and Thermodynamics in Borås comes in.

"It's brilliant to be able to manage waste and turn it into a resource, which is something we really need to start doing in Brazil."

Pedro Souza Filho has come to Borås to do his doctoral thesis and will be here for four years. He has lived abroad before:

"Yes, I'm a bit of a wanderer really," he says. "I love getting to know new places and cultures, and spent a year of my bachelor's degree in France. And now I'm going to be here for four years, which is very exciting. I'm doing my thesis on how we can use a fungus to turn industrial waste into a superabsorbent."

His supervisor pointed him in the direction of the University of Borås because of its good Resource Recovery programme.

Both Pedro and Vinícius arrived in Sweden at the beginning of the autumn semester and have now had time to sort themselves out and formulate a first impression.

"It's so quiet, clean and well organised here," says Vinícius Ramos. "Even though my hometown of Barão de Cocais is much smaller than Borås, it's far more lively."

"One thing that's strange here compared to the city of Natal where I come from is that so many of the shops and other places are closed in the evenings," says Pedro Souza Filho.

They have also given the issue of language some thought:

"It's fantastic that classes here are taught in English," says Vinícius Ramos. "It means that the university can take students from all over the world!"

"Swedish seems to be quite a difficult language," adds Pedro Souza Filho. "I'm still hoping to learn it and will be starting a course soon."

"I've already started," says Vinícius Ramos. "There are so many sounds in Swedish that are difficult to pronounce and hard to distinguish between, sk-, sch-, sj- and tj- for example. At the moment I can only pick out numbers when I hear Swedes talking, but am hoping to pick up more."

"And I'm starting to understand words written on things in shops," adds Pedro Souza Filho. "Which makes life easier when buying food! Lots of things are the same as in English, so it's not really that difficult."

They have been given student accommodation very close to the university, and get their accommodation fees and travel expenses paid through Science without Borders. They also receive an allowance for food, books and other expenses.

They meet both Swedish and foreign students and colleagues at the university, and are finding it quite easy to get talking to people. They have also noticed that there is a good atmosphere between teaching staff and students, and that lecturers ask for student feedback so that they can improve their classes.

"One of the main differences for me is that lectures don't take up all of my time," says Vinícius Ramos. "This is really great, and I don't think I'll have any major problems keeping up. In Brazil we have lectures and other activities every day and then have to find time to study on top of that."

One thing that both of them are hoping to see is snow:

"It looks so beautiful and cool," says Pedro Souza Filho.