Exciting meeting between glass and textile

The glass formed unpredictable shapes when it was blown into textile moulds the students had made from woven and knitted metal. These experiments were part of the workshop organized within ArcInTexETN project that explores new relationships between textiles and architecture. 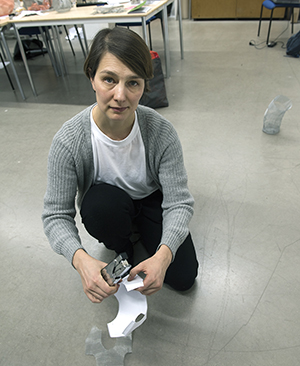 Architect Iva Rešetar led the workshop together with master glassblowers at The Glass Factory in Boda Glasbruk. The students attending the workshop study textile design at The Swedish School of Textiles. Iva Rešetar is also a doctoral student in the ArcInTexETN network, a collaboration between different universities in Europe with an aim of exploring design for more sustainable ways of living. This interdisciplinary research network connects the fields of textile design, interaction design, and architecture. The University of Borås coordinates the project and Iva Resetar’s home university, Universität der Künste Berlin, is part of the network.

“I work with a combination of glass and new, thermally adaptive materials to develop architectural elements that can store energy”, Iva says. The idea is to use materials instead of mechanical systems for heating and cooling, which in the future could result in major changes in how the thermal comfort in buildings is provided.

Iva’s research assignments include participation in workshops and projects at other universities in the network.

“When I was given the opportunity to become a visiting researcher at the Swedish School of Textiles, I started thinking about how to incorporate textiles into the design and production process of glass elements”, she says. “It is such an inspiring environment to work in, since The Swedish School of Textiles is good at expanding the field of textile design with new possibilities.”

During her stay at The Swedish School of Textiles last autumn, Iva visited The Glass Factory in Boda Glasbruk to develop a few early prototypes that she later presented at a seminar. At the end of the semester, the students were invited to a workshop to learn more about the glassblowing technique with textile moulds. Two of the four students who took the opportunity were Ronja Schweiger and Kathryn Walters. 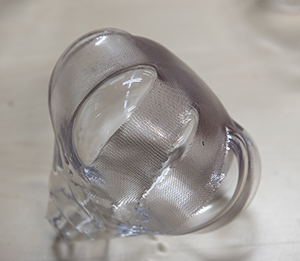 “We were impressed by Iva’s seminar and thought it would be exciting to work with glass like this”, says Ronja Schweiger.

“It was so free, playful, and nice to end the autumn semester with this”, Kathryn Walters says. “It was nice to do something involving an experiment rather than a perfect outcome.”

The students spent one day creating textile moulds for the glassblowing. The moulds were three-dimensional and had openings in different places where the melted glass could flow and form bubbles in a way that was hard to predict.  Due to the flexibility of the moulds, their shape changed as the glass started to expand.

“First, we made a series of moulds of a certain topology, according to instructions from Iva”, Ronja Schweiger says. “For example, we made a simple form of the mould with one or two openings. Having this restriction was good, because otherwise there would have been too many possibilities. Now we could see that even the moulds that had exactly the same shape gave different results when the glass was blown into them, depending on what material they were made of. We also used various types of metal in woven or knitted fabrics of different coarseness.”

“When we were in Boda Glasbruk, two glassblowers blew glass into our moulds”, says Kathryn Walters. “It was so fascinating, and so many things happened that we didn’t expect. Since they worked so fast, they also blew into improvised moulds that we made on the spot from offcuts.”

After the blowing, the glass needed to gradually cool down in an annealing oven for a day (optionally: …the glass had to be left in an annealing oven for a day to gradually cool down). Then the glass models were sent to the students, who were very happy to see the results. Carefully they removed the metal and saw that, for example, a copper weave left a pale purple shade in the glass. There was also a surface structure in the glass from the textile mould. Now they are thinking about using some of the objects as glassware and others as sculptures.

Iva Rešetar is also happy with the results.

“It was very interesting and instructive to have this immediate connection to the material and the glassblowing process. The important thing was to understand how glass can turn into a three-dimensional, architectural element using textiles. Now I would like to take this a step further. I’m thinking about how this type of handicraft could be used together with digital design to create prototypes for managing thermal environments in buildings.”

The Glass Factory in Boda Glasbruk would also like to see a continuation to this collaboration.

“We are almost like a test laboratory for researchers and artists, and we would like to develop the possibilities of using glass”, says Maja Heuer, museum director at The Glass Factory. “Also, our glassblowers think that it’s fun and inspiring doing this kind of collaboration, so we hope there will be more opportunities ahead.”