Licensed medical personnel on military operations abroad adapt easily to the military organisation but experience dual loyalties between the organisation and their medical ethics. This emerges in a new dissertation by Kristina Lundberg, doctoral student at the University of Borås and Jönköping University.

As a former battalion chaplain in Kosovo and Afghanistan, Kristina has experience of licensed medical personnel’s ethical dilemmas of working in a military intervention area and has seen the importance of proper training before working in a combat zone. 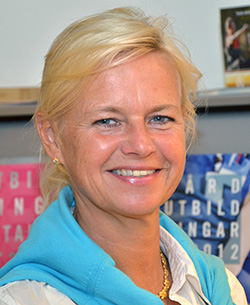 The results from her thesis show that licensed medical personnel easily adapt to the military structure. However, they do not only undertake care duties but also military duties, resulting in a dual loyalty – in other words that they weigh between their medical ethics and adapting to the military organisation.

“One example is that licensed medical personnel gather information that they call ‘intelligence’, which is a task normally carried out by trained military staff. When undertaking this specific military duty, they give different arguments to justify it, for example that it feels hard seeing the soldiers work hard when they have nothing to do at the moment”, Kristina Lundberg says.

Her results also suggest that tactical officers experience a challenge leading licensed medical personnel. Since they are often recruited outside the military organisation and come to the area on own rotation, the medical personnel are not co-trained with the other staff, which might have a negative impact on the operation.

“There is not much previous research in this field, which has had an impact on the preparations before licensed medical personnel go to an area where they actually risk their lives on a daily basis. My thesis could help improve these preparations. I could also imagine that the results could be used in prehospital care, which in many ways is an environment that sometimes resembles a combat zone”, Kristina Lundberg explains.