What is creativity, really? And what does it look like? Stefanie Malmgren de Oliveira has mapped the fashion designer's internal process with her doctoral thesis "Acts of seeing." "I want to make intuition tangible," she says.

Since ancient times, the creative process has been seen as something beyond understanding, something that could only be explained by divine revelation and ingenious flashes of inspiration. Stefanie Malmgren de Oliviera, recently having earned a doctorate in artistic textile and fashion design at the Swedish School of Textiles, has a different view on the matter. With her dissertation, she dives into mankind's inner life to systematise what she sees as the basis of all creativity.

Stefanie Malmgren de Oliveira
Works: Doctor of Fashion Design and programme coordinator for the Artistic Master's Programme in Fashion and Textile Design, specialisation in Fashion Design at the University of Borås.
Age: 40 years old .
Background: Grew up outside Munich in Germany. Educated in fashion design at the Royal Academy of Fine Arts in Antwerp. Worked at Balenciaga in Paris for a year before she started her doctoral education in Borås in 2010. After a couple of breaks and a while back in Belgium, she completed her thesis and exhibition "Acts of seeing in fashion design" in September 2018, with an associated exhibit at the Textile Museum.

"The hardest part has been to make it understandable," she says. “Many believe that it is about physical sight, but that is only part of it. Even a blind person has an inner vision that is activated in a design process."

The abstract will be made concrete. Thinking is translated into communication. Stefanie Malmgren de Oliviera realised that something more than text was needed to make the research understandable--images were needed. Therefore, the thesis, and the associated exhibition, were largely filled with images (by the photographer Jan Berg). By combining images with text, she was able to visualise the different stages of the design process's sight with the help of flower arrangements, among other things.

"I am used to working with textiles and clothing, but with the flowers it became even more concrete, even more pure," says Stefanie Malmgren de Oliveira.

What emerges is a way to analyse the creative process, to understand the inner vision as a methodological tool. Every act, every decision, is based on the designer's vision. In the vision. A vision that is, for obvious reasons, highly subjective. 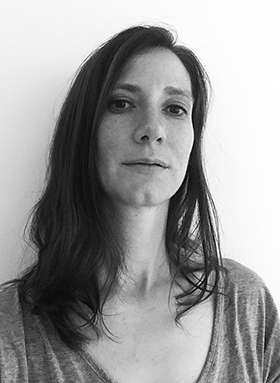 "That is one of the important lessons," says Stefanie Malmgren de Oliveira. "It is about being aware that everyone carries their own view, but that it is dynamic and can be affected. A fashion house has a vision that is ingrained in the company, which seeps into those who work there, while the chief designer's vision controls a large part of what is produced."

Increased awareness of vision can make it easier to communicate ideas with others, while at an individual level it helps the designer to sharpen his or her creation.

"It is easy to get stuck in a rut in one's vision, especially if you work in production. If you are aware of that, it is also easier to find new paths."

Stefanie Malmgren de Oliveira sees great potential for her research on vision when it comes to educational purposes, and uses her theories when she teaches the students in the Master's programme in fashion design at the University of Borås. She admits that there is a lot left to explore when it comes to our mythical creativity.

"It is a constant search," she says. "When you think you know something, it turns out you don't know anything at all. To look is to search."