Important information in relation to the corona pandemic

The University of Borås has now decided to move to level yellow as of 24 December. This is due to the ongoing pandemic. This decision means that all university operations are to be conducted digitally and remotely. The decision is valid at present until 24 January, if no other decision is made. Read more: https://www.hb.se/en/about-ub/current/coronavirus/

Today, various processes are used to convert organic waste into biogas. By combining two different processes, it is possible to obtain even more of valuable substances such as hydrogen and methane. The key is to make the most of the microorganisms that do the work.

Forest waste containing lignocellulose is a material that microorganisms do not break down very easily.  It takes a very long time for them to decompose naturally and in the industrial processes used to break down waste, microorganisms are inhibited by toxic substances and are released from the reactors when the remnants of the decomposition process are flushed out and replaced with new materials to become biogas. 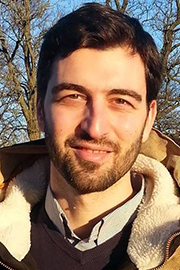 In his research project, doctoral student Konstantinos Chandolias shows that it is possible to get around the problem and at the same time obtain a higher amount of valuable gases such as hydrogen and methane that are used for the production of biofuels and other valuable substances.

"By linking two types of process platforms, one for gasification and one for fermentation, which are currently used in the industry separately to produce substances such as ethanol, methanol, and ammonia, it is possible to process this waste that is so challenging to break down. In the gasification process, syngas (synthetis gas), a mixture containing hydrogen and carbon monoxide in particular, is formed. By allowing the syngas to begin the fermentation process, it is possible to obtain an even greater amount of hydrogen or methane. Carbon monoxide, which is toxic, acts as food for the microorganisms that produce hydrogen and methane,” explains Konstantinos Chandolias.

Membranes keep the microorganisms in place

To make the most of the microorganisms, it is important that they remain inside the reactor.

"We have used a special type of bioreactor (reverse membrane bioreactor) which means that the microorganisms can be retained inside the reactor. They are trapped in a kind of membrane rather than floating around freely in the reactor. While the microorganisms are thus protected from harmful substances, the membranes let the substances, such as methane, hydrogen, and various acids produced by the organisms, through.”

"The benefits of the new method are that it is possible to reduce emissions of carbon dioxide and methane; it is possible to use the industry's emissions of gases as substrates; and it is possible to produce more methane and hydrogen, which in turn can be used for the production of biofuels and other valuable substances. It also allows for a reduction in the amount of waste put into landfills or combusted, something that otherwise results in significant emissions,” says Konstantinos Chandolias.

The project is in line with the UN's Global Sustainable Development Goals on Energy, Environment and Climate Issues.

Konstantinos Chandolias defended his doctoral thesis at the University of Borås on 29 November 29 2019.

Title of the thesis: Enhanced Methane and Hydrogen production in Reverse Membrane Bioreactors via Syngas Fermentation

Gasification is a process in which a organic fuel reacts with a controlled amount of oxygen and/or water vapor, and thus converts into carbon monoxide and hydrogen. (Source: Wikipedia)

The microorganisms used in the process are anaerobic, which means that they live in an oxygen-poor environment.