A stroke is a condition that causes great suffering for both patients and their relatives. It is the most costly diagnosis in healthcare, since those who are affected often need long periods of rehabilitation. The University of Borås is involved in several projects linked to strokes. Here, some of the university’s researchers talk about their research.

Neurologist Peter Borenstein has many years of experience of working with strokes and their consequences. He has been an adjunct professor in caring science at the University of Borås for some time now, and he emphasises the importance of research into strokes. 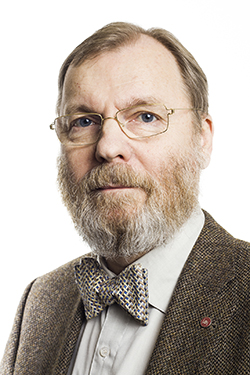 “It’s a very common diagnosis affecting around 30,000 people in Sweden every year. It’s also the diagnosis that requires the most in-patient care days. It involves an incredible amount of suffering for patients and their relatives, and costs a great deal of money – both for those affected and for society as a whole.”

Peter highlights four particularly important areas for research: why people suffer strokes, how strokes can be prevented, how to prevent brain damage being as great as is often the case, and how patients and relatives can adapt to the changed situation after a stroke.

“I’ll be taking part in some of the research projects currently being carried out or planned at the University of Borås. I also want to learn more about the psychological and social consequences of suffering a stroke, particularly aphasia. How can patients and their relatives adjust to the new situation and deal with it?”

The time between raising the alarm and treatment

When a patient suffers a stroke, receiving treatment quickly is extremely important. If thrombolysis – a clot dispersal treatment – is given within 4.5 hours to someone who has suffered a stroke without a cerebral haemorrhage, the permanent damage can be minimised.

In a research project led by docent Birgitta Wireklint Sundström (among others), all cases with a final diagnosis of stroke in Region Västra Götaland over a four-month period were studied. This showed the time it took from calling an ambulance until stroke patients reached radiography, where it is possible to tell whether they have had a cerebral haemorrhage. Thrombolysis is only given where there is no cerebral haemorrhage.

“The median value was almost four hours, so that needs to be reduced,” says Birgitta, who works at PreHospen – the Centre for Prehospital Research – at the University of Borås. “We’re still analysing the results from the study, but the actual data was gathered a few years ago. I believe things are quicker now in many places, since fast-track processes have been established whereby suspected stroke patients come straight to a stroke unit, even at regional hospitals.”

She goes on to explain that PreHospen is now one of six centres of expertise at the university, where there is an emphasis on research teams who have a relatively high degree of freedom.

“We are now researching ambulance patients from various perspectives, such as patient safety, patients’ and relatives’ experiences of paramedic care, assessment and road safety during paramedic care, staff working environment and so on. Prehospital care is a vast research field where a great deal is going on – it’s about so much more than just driving the patient quickly to hospital. It’s the first link in the care chain, and it’s a piece in the health and medical care puzzle that’s gaining ever greater importance. And stroke research is, of course, an important part of this.”

About stroke:
Also known as a cerebrovascular accident.

A condition in which some of the brain’s nerve cells are damaged due to a lack of oxygen.

Caused by a cerebral infarction (around 85 percent) or cerebral haemorrhage, which in turn is often caused by some form of cardiovascular disease.

Affects around 30,000 people in Sweden each year, both old and young.

Cerebral infarction is caused by a clot in a blood vessel that supplies the nerves in the brain with oxygen and nutrients.

In the case of cerebral haemorrhage, a vessel in the brain or on the surface of the brain bursts, resulting in blood entering the tissue of the brain, which can result in damage to nerve cells and tissue around the brain.

It is common for those affected to experience paralysis on one side of the body after a stroke.

Aphasia, the loss or deterioration of language skills, is also common.

IT solutions for paramedic care

The University of Borås is also one of the partners involved in a research project called PrehospIT Stroke, which deals with IT solutions for paramedic care focused on stroke patients. Magnus Hagiwara, a senior lecturer at the University of Borås, is responsible for the research element of this project.

“We’re trying to find ways to identify stroke patients as early as possible, so that those who need it can quickly get clot dispersal treatment.”

This can be achieved in a number of different ways.

“For example, operators who receive the emergency call for an ambulance need better tools in order to make the right decisions,” explains Magnus. “Solutions for accessing key patient records while the ambulance is still on its way are also important, as is better decision-making support for paramedics on site. Solutions for sending information to a neurologist who can decide whether the patient should go straight to radiography and whether thrombolysis is appropriate. It’s also important to ensure that the different IT systems have the same terminology so they can talk with each other and interpret the information in the same way.”

PrehospIT is a VINNOVA-financed collaboration project that brings together all those involved: medical technology companies, VGR IT (Region Västra Götaland’s IT unit) and several universities and colleges. They work together in a department at Lindholmen Science Park in Gothenburg, and are currently planning for a package of solutions in which different groups will be responsible for different parts.