Breastfeeding is not simply a means of nutrition

New research reveals that breastfeeding, regardless of whether it is working well or not, affects a woman’s existential experience. Allowing mothers to take the lead on healthcare issues can improve their sense of safety and security.

“Breastfeeding raises questions about what a good woman and mother should be like,” says Lina Palmér, care sciences researcher at the University of Borås and Linnaeus University. “And regardless of whether it is working well or not, it affects the mother-child relationship.”

Her doctoral thesis, “Breastfeeding and Existence: Motherhood, Vulnerability, and Interdependency,” involves 23 interviews with 16 women who want to breastfeed.

She examines their experiences of breastfeeding that is working both well and poorly. She also explores the factors that cause women to stop breastfeeding, or to continue despite the attendant difficulties. In addition, she analyses a case study of a mother who continued to breastfeed for nine months in the face of severe problems. 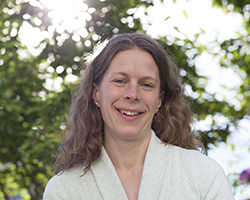 “My research makes it clear that the healthcare system looks at breastfeeding simply as a means of providing nutrition,” Ms Palmér says. “But the volume of milk produced and the weight of the child are poor measures of how a mother is doing on a mental, emotional and spiritual level.”

Breastfeeding that works well is a special privilege and an opportunity for a woman to grow and develop. The mother-child bond strengthens and the woman feels affirmed as a person.

“Many women want to breastfeed and actually start doing so,” Ms Palmér says. “However, difficulties frequently arise that cause them to stop within the first six months. But what does the woman really want to do? Is stopping consistent with her innermost wishes? Or would she prefer to continue but is afraid that she won’t be able to cope with the pressure and frustration.”

The problems that tend to crop up often make a woman feel let down, as though she has been a bad mother. She begins to think that her child is rejecting her. She might even experience anger at the child.

“Many women are left to their own devices because the community and healthcare system believe that she will naturally know how to make breastfeeding work,” Ms Palmér says. “But that is a terrible misconception. The mother finds herself in unknown territory, develops hostility to the child and those who should be helping her.”

Care providers tend to focus on milk production and the weight of the child. They poke at her body and breasts and make her feel like an object.

Mothers are also victims of what Ms Palmér refers to as cultural oppression. The unstated assumption is that breastfeeding is a natural process that women should be able to handle without outside intervention or support. A mother who wants to stop breastfeeding may be held back by the fear that others will think poorly of her.

“But it is a woman’s right to breastfeed, receive the care she needs to deal with the emotional issues that arise, and stop if she so chooses,” Ms Palmér says.

Swedish authorities recommend that women breastfeed and they and keep close statistics on those who decide to stop, but they rarely bother to ask why.

In Ms Palmér’s view, the healthcare system needs to get its act together and understand that the choice to breastfeed or not is an active, conscious one. And the decision to stop is often preceded by a long, arduous and lonely inner battle.

“Many mothers who stop breastfeeding experience guilt feelings, but their primary motive is to assume responsibility for their relationship with their child, to prevent a gradual loss of bonding and intimacy,” Ms Palmér says.

Part of the thesis is a case study of a mother who continued to breastfeed for nine months in the face of severe problems. Among the issues were the physical changes she was going through and the challenge of accepting sole responsibility for another being’s need of both intimacy and nutrition.

Breastfeeding in figures
An average of 96% of women breastfeed wholly or in part when their infants are one week old. The figure rises to 63% at six months.

A total of 66% of mothers rely exclusively on breastfeeding when a baby is two months old and 52% when the baby is four months old. Only 14.5% follow the recommendation of exclusive breastfeeding at six months.

The regional differences are substantial. The breastfeeding rate during the first six months of an infant’s life is highest in Stockholm, Uppsala and Gotland, whereas it is lowest in Västmanland and Jönköping.

The statistics cover children born in 2012 who were monitored up to the age of 12 months.

Source: Swedish National Board of Health and Welfare

“She experienced breastfeeding as extremely taxing but was afraid to stop out of fear that both she and the community would look down on her as a bad mother,” Dr Palmér says.

Her friends and family wanted her to stop and use formula instead. But that only made her more determined to fight on.

“She continued to breastfeed to prove, both to herself and others, that she could make the grade,” Dr Palmér says. “It was a way of strengthening her spirit and sense of self-esteem. She feared that her vulnerabilities would rise to the surface if she stopped.”

Breastfeeding challenges brought out a number of troublesome feelings. Not to mention that she was angry at her child, certainly a projection of her own sense of shame. Nor could she conceal her fury at care providers and the general community. Her anger served as an incentive to continue breastfeeding.

“Nobody asked her how she was feeling – everyone just wanted to solve the problem for her,” Ms Palmér says. “Someone could simply have asked, ‘How are you doing?’”

Of course, the next step is to take responsibility for acting on the answer. The healthcare system has a key empowering role to play in such situations.

“My case study clearly demonstrates that statistics are a poor yardstick for understanding breastfeeding issues,” Ms Palmér says. “Existential concerns fall by the wayside. My thesis has the potential to wake the healthcare system up, as well as shift public discussion towards the perspective of women instead of a bunch of figures and medical considerations.”

Taking the lead through talking

The women who continue breastfeeding in the face of difficulties and come to the point where it is working well have often found someone who can support them in feeling secure. Whether a care provider or a member of the family plays that role is of little importance.

“A sense of existential security is the bottom line,” Ms Palmér says.

Stopping breastfeeding or switching to formula is no quick fix.

“The most important thing is the opportunity for a woman to share what she is going through with another person,” Ms Palmér says.

Her thesis proposes that women take a lead in ensuring proper health care by telling their stories and being heard. A woman who is able talk about her feelings and know that someone is listening will feel inevitably more secure.

Ms Palmér argues that the healthcare system should ask for women’s stories when they are pregnant and follow up at the delivery ward and during subsequent paediatric appointments. Simply eliciting an affirmative or negative response about breastfeeding during pregnancy is a far cry from what is needed. A woman’s story must be heard and respected at each step along the way.

“And the dynamic remains just as real when the second child arrives,” Ms Palmér says. “A mother may have developed a breastfeeding phobia and not be up to trying again. Care providers must understand that breastfeeding has an existential dimension. In other words they need to combine a medical perspective with the insights of care science and women themselves.”