Unsold clothing rises from the ashes

Swedes buy 15 kilograms of fabrics per capita every year. And they throw away 8 of them. Obviously a monumental waste of natural resources. The purpose of the Re:textile project is to promote recycling in the textile industry.

If a company has 5,000 summer dresses left over when the autumn season rolls around, more likely than not they will be incinerated. Or they might end up at a second hand store. One option is for another company to buy them, remove the tags and add their own distinctive features. The path would then be clear to sell them as a new product under the company’s own name.

Accelerating production
Annual production of textile fibres has tripled since 1980 from 30 to 90 million tonnes.
Meanwhile, annual per capita consumption of new production has almost doubled from 7 to 13 kilograms.

A chance for doomed material to live a second life. And the original manufacturer or retailer could earn a little money on the side. Not to mention the efficiencies involved in creating a product absent normal development costs. Circular economy at its best.

The eight-year Re:textile project is based on a research study conducted at the Swedish School of Textiles on behalf of the Västra Götaland Region. The aim was to explore the prospects for redesign (or upcycling) in the textile industry. The overwhelming conclusion was that the approach can be commercialised, potential volumes are more than sufficient and the market would be receptive.

Reusing fabrics that have already been manufactured offers dazzling environmental benefits. The study also found that innovative business models, design processes and logistics will create latitude for substantial advantages from the point of view of business administration. 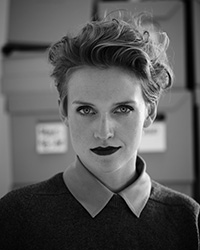 Companies had the opportunity during the spring to express interest in improving their ability to circulate their products. Adrian Zethraeus, the Re:textile project manager, interviewed 20 businesses of various sizes and shapes to learn about their needs, preferences and challenges.

Anna Lidström, the artistic manager, received a Master’s in Fashion Design at the University of Borås in 2011. Since then she has worked as both a stylist and designer in the fashion and advertising industries.

“My role is to identify the potential for upcycling from a design point of view,” Ms Lidström says. “Are their other solutions that promote exploration of new modes of expression in the fashion industry? We presented a few possible scenarios during Almedal Week 2015. And we’re not talking about tie-dyeing old T-shirts, as some people seem to think.”

The next step for Re:textile is coming up this autumn, including workshops in Borås to look at available opportunities by considering actual cases of regional businesses.