A fungus that produces ethanol and biological plastic

It’s a small, yellow coating in a plastic container. The thread-forming fungus might not look like much, but this is a super fungus. Researchers at the University of Borås are demonstrating that, under the right conditions, the fungus can create animal feed, the second generation of ethanol and plastic film, and can be an important component in nappies.

Two glass flasks stand shaking in a water bath in the lab. Patrik Lennartsson, a senior lecturer in resource recovery specialising in biotechnology, lifts one of the flasks and points out the yellowy-brown sludge swishing around on the bottom. Filamentous – or thread-forming – fungus is growing. This is not the kind of fungus that you might pick in the forest. It’s more like the kind found in mould-ripened cheese. A microfungus that grows a bit like an oak tree, but in miniature form. There are thousands of species of thread-forming fungi, which are divided up into zygomycetes and ascomycetes. The species we will be learning more about is called Neurospora intermedia, and is an ascomycete. In its native Indonesia, it is sold as a powder for use in fermented dishes such as oncom or tempeh. 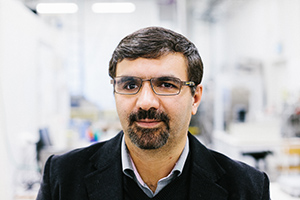 Researchers at the University of Borås have studied a number of different edible species of fungus, and have discovered that this one – Neurospora intermedia – has the best ability to produce ethanol from residues and waste. Professor of Bioprocess Technology Mohammad Taherzadeh discovered it sixteen years ago while looking for organisms that could produce ethanol from pentoses (the collective name for simple sugar types, the most important of which are found in hemicellulose in a number of plants). Since then, he has studied more than a hundred species of fungi.

“This fungus is like a Swiss army knife: compact, but with many uses. The important thing is that it can convert something with a low value into something else with a higher value. It transforms waste into a resource. The great thing about using an edible fungus is that we know that using it won’t harm the environment.”

Next to the water bath stands what looks like a small, steel space rocket. This is actually a reactor for producing fungi on a larger scale. Next to it is an even larger rocket. Together, these three vessels present a clear picture of the dilemma faced by research and researchers: scaling up. Growing fungus in a glass flask is one thing. Creating a sustainable process on a scale of 80,000 litres is another thing entirely.

“When we researchers say we’re ready now, it often takes several years before the method can actually be used within industry,” explains Patrik.

Improving the efficiency of ethanol production

In this project, ‘Fungi-based biorefinery with ethanol production’, which involves improving the efficiency of ethanol production, he says that things are proceeding incredibly quickly. This is largely thanks to a committed partner with large resources and with which the researchers have close contact: Lantmännen Agroetanol in Norrköping. The company is Sweden’s largest producer of ethanol for fuel, producing around 230,000 cubic metres of ethanol each year. And if the transport sector of the future is to be fossil-free, smarter transport – and fuel that can replace petrol and diesel – must be developed.

“Ethanol is usually produced from sugar or starch from products such as wheat and maize. Using this method, in which we add the fungus, ethanol is also produced from the cellulose in the husk of the wheat grain. The residual product is also a protein-rich animal feed. It is currently mainly suitable for cattle, but we hope to be able to produce feed for chickens and salmon farming in the future. Previous research to produce cellulose ethanol has been too expensive to commercialise, but this method is fully adaptable for the market.”

Calculations show that between three and five percent more ethanol can be produced using this method. This might not sound like much, but that’s the thing about scaling up. It becomes something worthwhile. It’s no wonder Lantmännen Agroetanol has been sending new fungus by taxi from Borås to Norrköping once a week for the last few months, to provide more fungus as quickly as possible when it’s at the right stage of growth. It is hoped that work will begin on an industrial scale during 2016. 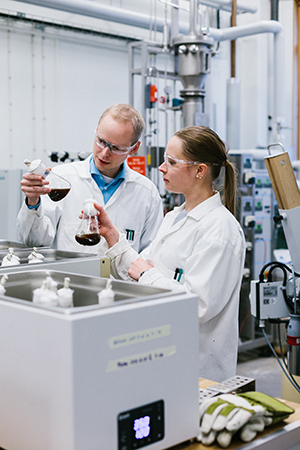 Patrik is most at home in the lab, but these days he doesn’t wear his white coat very often. He spends most of his time at a computer in his office, eight floors up at the university. That’s when he isn’t teaching students or supervising doctoral students. His doctoral students come from all over the world, and include chemists, microbiologist and bioengineers.

“Background isn’t particularly important,” he says. “The important thing is being the right type of person. Curious, extremely persistent and prepared to learn. Being a doctoral student involves learning to carry out research, and you will make plenty of mistakes. It’s a matter of being extremely interested in your subject.”

Carried out doctorial studies at Chalmers

Patrik carried out his own doctoral studies at Chalmers University of Technology in partnership with the University of Borås. He doesn’t miss having to go to the lab at two o’clock in the morning because a particular fungus needs attention. But he still finds it “fantastically, wonderfully fun” to carry out research, and to discover new knowledge from time to time.

Patrik’s main focus has been on ethanol, always with the thread-forming fungus as his starting point.

National leaders when it comes to fungi

Since 2001, the researchers have worked on 12 projects involving the fungus. The research team consists of five senior researchers, two postdocs and ten doctoral students. After many years of research, the university’s researchers are national leaders when it comes to fungi, and now have expertise and products that are of interest to industry. Seven Swedish and German companies are currently interested in cooperation. Mohammad hopes that the sale of protein-rich animal feed will begin within the next two years. And he hopes that the second generation of ethanol, produced from cellulose, will become a reality within five years. As yet, no one knows just how much it will be possible to extract from this apparently humble fungus.

“It’s a bit like climbing a mountain,” says Mohammad. “Once you get there, you just see more and bigger things beyond the mountain.” 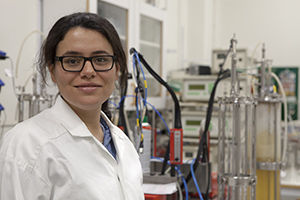 There are plenty of people dressed in white coats in the teaching lab. Around twenty master’s students are busy with their experiments. Akram Zamani watches over the various processes. She is a senior lecturer in bioengineering, and her research focuses on the cell walls of fungi. Together with Mohammad and Patrik, she has worked the longest with the thread-forming fungus. She completed a doctoral degree 2010, examining in greater depth how superabsorbents – granules with an exceptional ability to suck up moisture – can be extracted from cell walls. Superabsorbents could be used in nappies and sanitary towels, for example. An additional bonus in this context is that the cell walls of the fungus have natural antibacterial properties, combating unpleasant smells and the growth of bacteria.

Just as with ethanol production, it’s one thing to state what is possible and another thing entirely to start large-scale production. However, a biologically produced nappy would be an important environmental contribution and would be of great interest to the industry.

“Since the polymers, or the plastics, in the nappy come from biological materials in the form of the cell walls of the fungus, they can be recycled. We don’t need oil to produce them.”

Studying cell walls of the fungi

After completing her doctoral degree, Akram moved back home to Iran in 2010. But just over a year later, she returned to Borås. Since then, she has devoted her time to studying the cell walls of the fungus. The aim is to produce a biological thin plastic film that resists steam, oxygen and carbon dioxide. A kind of cling film. Here, too, natural antibacterial properties would be a real benefit if the film is to be used for storing food.

The project Akram is currently working on involves breaking down the residues from producing juice from citrus fruits. Every year, around 15 million tonnes of citrus waste is generated from juice production. The thread-forming fungus is added to the waste, and grows. The researchers can extract chitosan from the fungus pulp, which in turn is mixed with the fruit substance pectin to form polymers.

“If we were to succeed in producing bioplastic, it would be an enormous step forwards,” she says. “Researchers are divided on the best approach, with many different types of research being carried out around the world. There’s enormous interest from industry in such a product!”

She and her doctoral students are experimenting in the lab. So far, there have been minor problems with the plastic being uneven, having small holes in it and not really being transparent. But things are getting better all the time. The project will be concluded at the end of 2016.

May have a medical effect

As if ethanol, protein-rich animal feed and bioplastic were not enough, researchers at the University of Borås have discovered that glucosamine can also be extracted from the cell walls of the fungus. This substance is the main constituent of osteoarthritis medication. It is currently produced from prawn or crayfish shells, which can cause problems for patients with shellfish allergies. Chitosan is another substance that researchers have found they can extract.

“And chitosan is said to reduce cholesterol, and even to have an effect on people who want to lose weight,” says Akram. “I don’t know whether it really works, but people say it does.”

And there are even more potential applications for the thread-forming fungus. Patrik explains that different parts of the fungus could be used to produce organic acids and enzymes for products such as laundry detergents.

“Bioactive components that reduce blood pressure, for example, could also be produced relatively simply,” he adds.

And there might be more super fungi that have not been discovered yet. It remains to be seen what else the research time will find as they climb the mountain.