A thread for life

Smart textiles can make life simpler. Two research projects at the University of Borås are examining threads that react to movement. In future, this could make life easier for patients with conditions such as Parkinson’s disease or epilepsy. They can also control a robot.

The aim of Anja Lund’s research is to develop textile solutions to look at changes in human movement in order to obtain a better diagnosis of medical conditions.

The Electricity Lab on the fourth floor of the Swedish School of Textiles is clean and quiet. Here, textile technology postdoctoral fellow Anja Lund and her doctoral students are carrying out their laboratory work. On the work surface, a monitor is connected to a device that looks like a small hard drive. This is an oscilloscope, a measuring instrument that shows how electric voltage varies over time, or how two electric voltages vary in relation to each other. A larger version of a cotton reel stands next to it. The reel holds metre after metre of piezoelectric thread, a special thread that has been developed here and plays a leading role in two major ongoing projects. 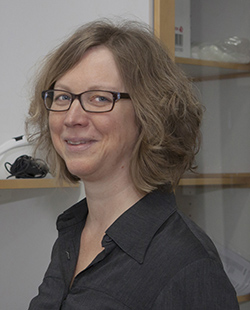 One of them relates to wearable sensors in smart textiles. Researchers are working with partners including the Sahlgrenska Academy to develop a top that can monitor the movements, breathing and heart rate of epilepsy, Parkinson’s disease or stroke patients. And this is where piezoelectric threads come in. Piezo comes from the Greek for ‘press’, and piezoelectric threads react to pressure or pulling. When woven into the top, they are stretched when the wearer moves and then generate an electric signal. In the right sort of textile structure and in combination with advanced data processing, they could be used to register movements that say something about how the wearer is feeling. Check-ups are currently carried out during regular healthcare visits. One important difference if checks could be carried out using wearable sensors instead would be that measurements could be carried out over a long period of time in the patient’s home environment. It is hoped that this could also result in patients becoming more involved in their care and treatment. Using the wearable sensors, the doctor would then be able to carry out an assessment of care-related and medical needs based on more reliable data.

About:
“Wearable sensors in smart textiles” is a five-year interdisciplinary collaboration project financed by the Swedish Foundation for Strategic Research. The project was started in July 2014 by the University of Borås in association with the Sahlgrenska Academy, Swerea IVF and Acreo Swedish ICT.

The project dealing with robots is a collaboration between the University of Borås and the University of Skövde. Since 2013, the project has involved strategic research cooperation within four themes: Design, textiles and sustainable development, Information and communication technology, Care and wellbeing, and Future enterprise and new business models. The first two themes are currently being co-financed by Region Västra Götaland.

“Instead of relying solely on what the patient says about their epileptic seizures as is currently the case,” explains Anja.

The first clinical studies were carried out together with the Sahlgrenska Academy in early 2016.

Putting it simply, you could say that one of Anja’s research projects is about medicine, and the other is about robots – or how smart textiles can help people and machines to communicate with each other. For example, she and her colleagues incorporate parts of a robot into a textile material or create what Anja calls textile muscles. The textile can create movement by expanding and contracting in reaction to heat.

“We’ve also woven a glove using smart textiles that generates electronic signals based on how the threads stretch. These signals can then be sent to a robot that responds with movement or speech.”

Anja graduated in electrical engineering from Chalmers University of Technology in 1997. Her degree course was both challenging and stimulating, and she was soon able to put her knowledge into use when she got a job as an electronics designer at Ericsson. Unfortunately, she also found that she enjoyed studying the subject more than working with it. For example, a person wearing such a glove – with threads woven into it that convert stretching into electric signals – can control a robot just by moving their hand. According to Anja, this discovery could have significant applications within rehabilitation, as the garment can feel what the wearer is doing and react to or register this. By also integrating textile muscles in the future, a glove could be created that would help the wearer by strengthening movements. Within the robot project, textile experts from the University of Borås are working together with IT experts from the University of Skövde.

“Quite simply, the job wasn’t fun enough. I realised that if I’m not really interested in my job I can’t really be good at it either.”

One thing that she has always been passionate about, however, is sewing. Textiles have been a constant presence in her life, in one way or another. Anja initially took part-time leave in order to study. Three years later she took her second degree, this time graduating in textile engineering from Borås. As her education came to a conclusion, she met a professor who taught polymer technology.“He opened my eyes to the fact that I could stay in research. It had never occurred to me.”

During her doctoral studies, Anja gained expertise in textile technology and also had three children. She defended her thesis on materials science in 2013 and felt more strongly than ever before that this was where she belonged. Today, Anja’s days are a combination of teaching, supervising doctoral students, applying for research funding and carrying out practical experiments. She is still happy to find herself somewhere that feels right.

“I’m often pleasantly surprised that things are working out so well. You come up with an idea, people look at you as if you’re mad, and then it actually works! It’s often easier than you would think.”

Although sewing and textiles were her route into textile engineering, she enjoys being
forced to understand what is happening in the minutest of details – such as getting the right structure at molecular level in order for a thread to move. In a polymer thread, the molecules arrange themselves in amorphous and crystalline regions. In simple terms, you could say that the amorphous regions can move and the crystalline regions provide stability. The right number of both are needed, and the distribution is determined by how the polymer material is processed, in other words how temperature and speed are used when spinning the fibre.

“My dream is to be able to create electronics that are completely textile. Replacing all the hard components with threads would make it much more comfortable for a patient to wear.”