Hi researcher! How can outsiders help organisations with smart IT solutions?

Daniel Rudmark researches how external programmers can create apps and websites to facilitate the flow of information within public transport. This is something that happens all the time, but not necessarily in the right way.

What is your research about? 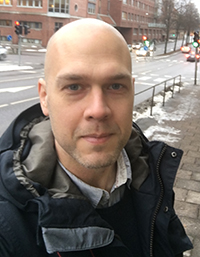 My research is about how businesses and authorities can share information with external programmers. You could say that one consequence of greater digitisation is that we are constantly online, for example with smartphones, and so we can be reached in many new contexts. But many organisations cannot afford to meet all the needs and wishes of their customers and users. So one way of doing this can be to give external programmers access to the organisation’s data so that external players can build many more – and often better – digital services that the organisation would be able to build itself.

Does this involve problems?

Sometimes programmers do this without the organisation’s permission. One recent example is the website https://ffsbio.se/, which was built by a programmer who thought it was too complicated to find out which films are on at which cinemas using the official SF website. Such services that operate without the organisation’s approval can be popular with users, but often experience various technical and copyright problems. My thesis is about how organisations can design technical and legal interfaces so that development can be carried out in an orderly manner while also supporting programmers in their work.

Why is your research important?

I’ve mainly worked with various Swedish public transport providers who need to increase the number of passengers in order to meet their emissions targets. One important aspect of public transport is providing accurate and relevant information about issues such as delays or how to get from A to B. Since the public transport providers currently share their information with external programmers, passengers have an abundance of services to choose between. Some of these have hundreds of thousands of daily users. New, more specialist services have also emerged that guide passengers throughout their journeys from door to door. This makes it much easier for people with cognitive conditions such as ADHD to use public transport.

Daniel Rudmark
- An adjunct lecturer at the University of Borås’ Department of Information Technology.

- Teaches informatics – the borderland between technology, people and organisations.

- Dares to believe that we will manage to achieve the climate targets.

What would your dream project be?

I’ll be working on something of a dream project this spring. I’ll be working together with a team of other experts in partnership with the World Bank to devise a general method for how countries can make traffic information available to external programmers. The countries that the World Bank works with often have significant traffic problems but little information about them. If citizens can get access to information about public transport and traffic accidents, it is hoped that these problems can be alleviated.

Have you encountered any misconceptions as a researcher?

No, I haven’t. If anything, I’ve maybe encountered excessive respect!

What would you be doing if you weren’t a researcher?

I used to work in the IT industry, so I would probably be doing that.

What do you do in your spare time?

I drive my children to and from various activities, cook or run. I’m currently also renovating a house I’ve just bought!