The power of social media

Through social media, we can see snapshots of refugees, be exposed to marketing or find friends with similar interests.

“For better or worse, social media permeates social development and our relationships,” says Jan Nolin, a professor at the Swedish School of Library and Information Science who researches social media.

Today, many people share their lives with their friends by posting status updates on Facebook, sharing their holiday photos on Instagram or tweeting their views via Twitter. Social media is a collective term for all the websites and online services where people can come together and create content. 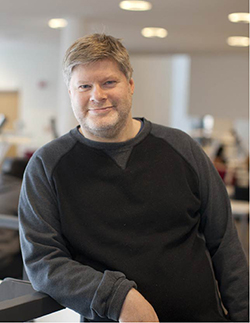 “Previously, our lives were more about what happened in our neighbourhood and our relationships with the people nearby,” says Jan Nolin who researches how social media affects our behaviour patterns. “Now, social media has erased national borders and distances. We can relate in a different way to events and people in far-away places, and can meet up in global communities online.”

The picture of Alan, the dead three-year-old who washed up on a Mediterranean beach, generated an emotional reaction to the refugee crisis among people all over the world – including those in power. The image spread quickly via social media.

“When three billion people are connected online, there is an immensely powerful force. But it’s still hard to achieve the kind of impact that the image had. Reaching out to so many people with a message usually requires planning and a great deal of knowledge about how social media and information channels work.”

Jan was therefore surprised that the photo of the dead refugee boy spread across the world so quickly.

“It was probably a combination of the right timing and a strong photo that aroused feelings of empathy and solidarity. There was a real need at that very moment for an image to symbolise the terrible situation.”

He explains that social media channels such as Twitter and Flickr have been highly significant for people on the move. For example, they are used to spread information about dramatic events or to warn others about risky routes. When refugees reach a new country, they can also use social media to contact their fellow countrymen who are already there and find out about things like permits, authorities they can turn to or what things cost.

Profession: Professor of Library and Information Science at the University of Borås.

Favourite social media network: Patients Like Me. (Here, users can find people all over the world who suffer from the same complaints.) www.patientslikeme.com

Find out more about social media research at the University of Borås. SMS Social Media Studies

We need to be critical

For many Swedes, social media has become a natural part of their everyday lives. But Jan urges a degree of caution in its use.

“We must be aware that social media brings both advantages and disadvantages. We get new tools that can enrich our lives, but we also need to be critical of the messages we encounter.”

He believes that social media has become increasingly commercialised. Facebook and Google are examples of large multinational companies that can steer information towards their users based on their own profit-making interests. Users are exposed to advertising and information filtering.

“There is a risk that people – particularly young people – will see social media content as being politically and commercially independent. In actual fact, the very opposite is true. When you sign up for Facebook, you also accept a business model that can use information about what you do and how you feel, for example in marketing.”

In future, Jan hopes that schools will take greater responsibility for teaching pupils about source criticism.

“This is not something that we know about automatically. So it’s important for schools and libraries to teach us to become more aware of the risks on social media and the internet.”

Another possible negative consequence of social media is that users can be exposed to propaganda and that extreme groups – such as racists, paedophiles and terrorists – can find each other more easily and create forums. One terrifying example is how the terrorist group ISIS uses social media to recruit new supporters. Potential ISIS fighters can be invited to join private Facebook groups where they are put into contact with individuals who are active in Syria.

“These types of closed groups mean that the members never encounter opinions which challenge their world view, and that they are increasingly isolated from the rest of the world. This is a new form of brainwashing that can happen without people having to be kidnapped.”

On the other hand, however, Jan believes that social media is also a new tool for democracy. More people can express their views and form opinions. There are also examples of individuals who have quickly succeeded in raising large sums of money for those in need. But he still believes that individuals who have gained widespread attention via social media are the exception to the rule.

“It’s mainly companies and organisations with large resources and who know what they’re doing who succeed in spreading their message to very large numbers of social media users.”

The University of Borås currently has 15 researchers examining social media from different perspectives. This includes research on analyses of communication patterns in political discussions on Twitter, developing patient-friendly apps within healthcare, and young people’s identity creation on social media. In his own research, Jan critically reviews how social media affects social and cultural behaviour. Above all else, he reads and analyses research reports.

“I have colleagues who study flows on social media precisely when they happen. Some of the research into social media must take place in the present, since developments happen so quickly and we need knowledge about what’s happening online, here and now.”

“It’s a shame that more money isn’t being invested in knowledge that reflects on social media. The important question of whether we want this technological development is being completely neglected.”

Social media is here to stay

What does the future of social media look like? Jan believes that social media is here to stay, and that giants such as Facebook and Google will grow even bigger. But he hopes that there will also be another development − that local players such as schools, libraries, hospitals and local newspapers will become an opposing force.

“We’re currently working to develop patient-friendly apps and social media for healthcare. The idea is that people should have more influence. For example, instead of using Google to look for information about diseases, information should be available direct from healthcare providers. There will also be opportunities to come into contact with other patients via healthcare social media.”

Jan also believes that social media will experience a breakthrough among the elderly. Many pensioners are already applying for the courses offered by the library. These teach them how to connect with their grandchildren on Facebook, for example, or how to join new social networks.

“Social media can help to combat loneliness among the elderly.” 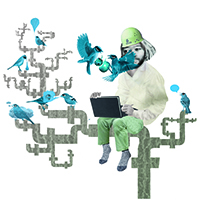 Source: “Swedes and the internet 2015”. Report by the Internet Foundation in Sweden.