Preschools must dare to teach about science

Children go outside every day. They learn about Sweden’s right to roam and the importance of protecting nature and animals. An open view of learning about nature has long been part of Swedish preschool culture. But preschool teachers are scared of teaching about science.

The Swedish National Agency for Education has recently focused on science and technology in preschools, offering schools and preschools support to develop teaching within these subjects. And science has been given greater prominence in the curriculum for preschools. There is also a sharp focus on children’s conceptual learning in science internationally. 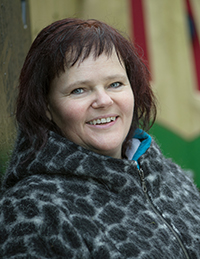 “It’s important for children to learn about nature and science early on in order to understand the world around them,” says Susanne Klaar, a senior lecturer and researcher in education. “If they learn about scientific phenomena at an early age, things are also easier later on at school.”

The title of her thesis is ‘Nature-oriented preschool education – Pragmatic studies of the individual, social and cultural dimensions of meaning-making’. In her research, she has studied children aged 1-3 and their meaning-making in connection with nature.

“In Sweden, we have a long tradition of children learning a lot about nature at preschool, such as dressing according to the weather or tidying up after stopping for a snack in the forest. But preschools have been less good at teaching science, and many preschool teachers find it hard – they don’t know how to teach it.”

She has studied children’s learning based on multiple dimensions, including the individual dimension of meaning-making. This involves understanding how and what young children learn. She talks about the time she observed a little boy sledging.

“What is it about his practical actions that allows him to keep moving? He didn’t talk about friction or smoothness – he just did it. The boy experienced the hill practically, and I could see how he changed what he did according to what he learnt. He bent his legs and put one hand on the hill as he went along to deal with the incline and the slipperiness and to climb more easily. At times, he walked on the mud instead of the ice.”

She has also studied the social dimension of meaning-making. This involves the relationship between preschool teachers and children, and how they guide children’s meaning-making. Instead of asking “Was that fun?” after the boy has sledged down the hill, the teacher can ask “Was it slippery?” or “Did you go quickly?”.

“By doing so, the teacher turns the child’s thoughts towards a scientific approach.”

Science in the Swedish preschool curriculum

Preschools should strive to ensure that each child:

develops their understanding of science and relationships in nature, as well as knowledge of plants, animals, and also simple chemical processes and physical phenomena,

develops their ability to distinguish, explore, document, ask questions about and talk about science,

develops their ability to identify technology in everyday life, and explore how simple technology works,

The child’s thoughts can also be turned towards aesthetic learning by asking if they felt giddy, or towards the moral or ethical knowledge that they shouldn’t go head first.

She has also carried out a cultural analysis of preschools, in which she studied rules, norms and habits at preschool – what teachers do unquestioningly, what comes naturally.

“I studied how habits affect certain things being possible and other things being less possible when children learn about nature.”

One example from her study is that when children want to play with water outdoors, they want to use brushes to paint with the water. No-one questions that they should wear waterproof trousers, there are brushes for everyone, and when the children come with buckets and ask for water the teachers say yes.

“These habits show that it’s possible for children to be involved in experience-based investigations. They get to try things and test things.”

But no teacher was actively present in their playing.

“So the learning was not verbalised. For example, they could have talked about what happens when you take a lot of water, and that it doesn’t matter that it evaporates. So I was able to note that in this particular situation, there were fewer opportunities for scientific conceptual learning.”

Teachers are afraid of science

The aim of Susanne’s research is not to say what preschools are good or bad at. But she wants to offer opportunities for preschools to critically review themselves. She also wants preschool teachers to think about what they say to the children and why, and whether the children are alone in their discoveries or if they are given guidance and challenges.

“I try to broaden the perspective. It’s not a matter of the child verbally being able to report knowledge about scientific phenomena such as friction, smoothness or inclines. But we can address these phenomena based on the child’s meaning-making – what happens if the slide is wet, and the difference between wearing waterproof trousers and not wearing them. There’s a lot to continue with.”

The Science and Technology in Preschools conference

In October 2015, the University of Borås arranged the annual Science and Technology in Preschools conference.

“At the start of the semester, when I ask how many students think science is fun, few of them think so. Many of them remember their own chemistry and physics lessons with dread. But a lot of them have changed their minds by the end of the semester!”

Susanne believes that most of the things around us can be seen from a scientific perspective. We can talk about sound, gravity and different materials. And there are books, courses and social media forums for preschool teachers who are interested and want to be inspired.

“Science is all around us, all the time. Most children love investigating, trying out, exploring and discovering their surroundings. And it’s important that preschools challenge and guide children in these situations.”

Now she wants to continue her research with practical studies of teachers’ observations and how these observations are conveyed to the children’s parents. She believes that when children are picked up from preschool, the focus of the hand-over is usually on whether the child has eaten well, slept or been to the toilet, instead of talking about how the teacher saw the child learning to climb an icy hill.