Important information in relation to the corona pandemic

The University of Borås has now decided to move to level yellow as of 24 December. This is due to the ongoing pandemic. This decision means that all university operations are to be conducted digitally and remotely. The decision is valid at present until 24 January, if no other decision is made. Read more: https://www.hb.se/en/about-ub/current/coronavirus/

How much we can trust technology?

Henrik’s research helps the leading and forward-thinking companies to analyse data. He establishes the extent to which we can trust our statistical models. His greatest role model in the research world hated computer science. Henrik does not, he is passionate about it. 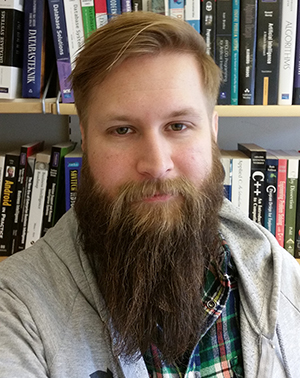 What does your research involve?

“It looks at predicting different problems using automatized data analysis. Using techniques such as data mining and machine learning, we look for patterns, connections and differences in large amounts of data. I work with predictive analysis and put simply, this can be compared with the weather reports. More specifically, I work with conformal prediction, which is based on evaluating how much we should trust data models and the predictions they make. If the weather report says it will be sunny but then it rains, we think the report was bad. However, it may just be the case that we placed too much trust in the model. It would be great if together with the prognosis, we could find out how much we can trust the model; if the prognosis says that there is a 50 or 99 per cent chance of sun, we can react differently.

Why is your research so important?

“I would like to say that automization, data modelling and prediction can already be used a lot in society. Google, Microsoft and other leading companies apply the technology in real life. It is not a case of letting the computer guess its way forward, it requires an additional factor that tells us how much we can trust the technology. This is where research provides an important security.

What does a normal day involve for you?

“Gosh, it’s difficult to say, my days are so different. I have quite a lot of freedom in my position and a lot of time to research. As a doctoral student, 80 per cent of my time is allocated to research. However, a regular day can include activities like research meetings, lectures, marking exams and sometimes sitting and programming”.

Do you have a role model in the research world?

“Richard Feynman, a theoretical physicist who said he hated computer science. But I like him, because of his curiosity and the fact he wasn’t afraid to ask silly questions. He took nothing for granted, dug deep into details and then dissected them. They are things I try to bring into my own work”.

What would you have done for a living if you weren't a researcher?

“From the moment I started researching I knew that this is exactly what I wanted to do. Partly because of the freedom, but also because I have a lot to say about it. But if I had to guess, I would probably have been a programmer or system developer somewhere”.

What do you enjoy doing in your free time?

“I’m interested in all types of gaming, both computer games and board games. Programming is on the borderline between work and a hobby, but I enjoy programming if I have some time to spare.