In the right place for developing plastic

Today's plastics made from petroleum need to be replaced with more environmentally friendly alternatives. A research team at the University of Borås, in cooperation with companies, is now developing biodegradable plastics and composites for the future's vehicles and buildings.

The polymer lab at the university is a hive of activity. Several researchers are about to make and test new materials to replace petroleum-based plastics. Behnaz Baghaei is standing at a machine that heats and compresses various substances to form a composite - an artificial material composed of different substances which together form a new material with new properties.

"It looks like an ordinary piece of plastic, but if you look really closely you can see the wires and fibres in the material," says Behnaz Baghaei, holding up a narrow rectangular slice of freshly-made composite.

Her composites are only made of biodegradable materials and are recyclable.

"I use renewable options like corn, hemp, flax and cellulose fibres."

She takes out a large roll wound with a fluffy white yarn. Behnaz Baghaei says that the yarn consists of hemp fibres and thin thread made from cornstarch. She has wrapped the thin thread around the hemp fibres. The yarn is then woven into fabric.

"When I heat and press the weaves, there is formed a hard biocomposite that is stronger than other biocomposites. That's because I let the hemp fibres run parallel and have not weakened them by their being bent or disarrayed. This composite is so strong that it can be used in the construction and automotive industries."

She says that another advantage of the composite is that it is light, as demanded by the automotive industry when they are looking for solutions to reduce fuel consumption in future vehicles.

Several companies contacted Behnaz Baghaei when they read about her research and development of biocomposites. Right now, she collaborates with the textile company Engtex in Mullsjö, which is testing producing her weaves in larger volumes.

"More and more companies are looking for environmentally friendly composite materials, but you have to also be able to show how production can be done on a large scale and cost-effectively."

The 29-year-old from Iran thrives in her research work at the University of Borås. In her varied work, she meets representatives from businesses and teaches students. And best of all, she likes her time in the polymer laboratory.

"I like to be in the lab to work on my ideas and knowledge. I try to develop environmentally friendly composites in different ways. It's exciting."

Mikael Skrifvars, professor of polymer technology, leads the research efforts to develop new environmentally friendly bioplastics and biocomposites. He has previously worked in the chemical industry in Finland and at the industrial research institute SICOMP. In 2003, he was employed at the University of Borås and began to build up polymer research there.

"The world faces major environmental challenges. One of them is replacing the plastic produced from crude oil. We also need to develop new alternatives to glass fibres used in composites as reinforcing material. Glass fibres have higher weights and are difficult to recycle," explains Mikael Skrifvars.

"Our research can be a contribution to a better environment. But there is an even greater threat than petroleum-based plastic. Vehicle emissions and fossil energy sources are the most serious threats to the climate."

Researching new plastics is popular. Mikael Skrifvars tells us that there is a lot of research to develop environmentally friendly plastics and composites at other colleges and universities in Sweden and around the world. But University of Borås is unique in combining textile and plastic in composite materials. 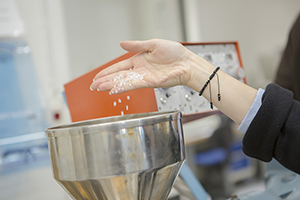 "Our composites might include fibres from hemp, flax or jute. We impregnate and bind the fibres together with a bioplastic made from soybean oil or corn starch.

"Textile fibres may replace glass fibres and act as by strengthening or reinforcing the plastic."

He lists a variety of examples of how biocomposites can be used in everything from airplanes, cars, wind turbine wings, to building materials, furniture and furnishings.

"Composites are lightweight materials, lighter than metal and wood. Another great benefit is that composites can be processed and used in many different ways." 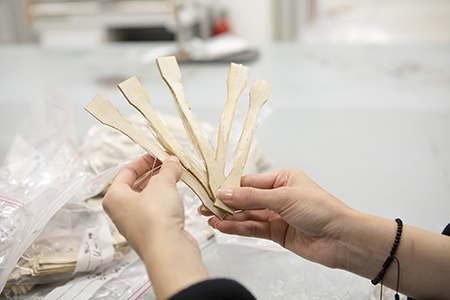 "Bioplastic has already had an impact. It is available in more products than most people know about, such as plastic items at fast food restaurants, food packaging or in ordinary plastic furniture."

But it is still difficult to produce bioplastics and biocomposites in large quantities and get the production to be commercially profitable. So far, the petroleum-based alternatives are too cheap and crude oil prices too low.

"I'm sure bioplastics and biocomposites will be successful widely. The question is not if but when."

Composites
Composites are artificial composite materials of two or more components, each of which has quite different characteristics. When the materials are put together, a new material is formed with new and improved features. Some advantages of composites is that they have low weight, good mechanical properties, and manufacturing technology means that complex products can be produced in a cost effective manner. Composites are used for example in cars, boats, airplanes, turbines, furniture and buildings.
Biocomposites are composites mainly produced from renewable raw materials and substances from, for example, jute, flax, wood fibre, soy beans, corn, banana plants and wood.

Did you know that …
... Every year, 300 million tonnes of plastic are produced and it takes about 1,000 years for oil-based plastics to be broken down. Bio-based plastics are broken down in only a few years.
... Most plastic eventually ends up in landfills or oceans. This can be prevented by recycling and reusing plastic.
... In the juice industry, there's an annual 15 million tonnes of citrus waste. Researchers in Boras are developing methods to produce biocomposites from waste from, among others, the juice company Brämhults.

Cecilia Ramberg of the industrial research institute Swerea IVF and Deputy Director of the LIGHTer (a cross-industry organisation for lightweight development) shares Mikael Skrifvars's view that biocomposites can be the material of the future.

"Environmentally friendly lightweight materials like biocomposites will be needed more and more, such as electric vehicles to reduce fuel consumption and lightweight bridges to reduce transport costs when bridges are built."

Within LIGHTer, there are approximately 250 companies, universities and organisations that can meet and exchange ideas. The University of Borås is involved in collaboration, as well as companies such as Volvo, Scania, and Saab.

"We are trying to create forums where research and industry can meet. Often it is industry that formulates questions they want help with. But it can also mean researchers who develop prototypes that they want to show off and build interest in.”

Last winter, LIGHTer and Mikael Skrifvars arranged a workshop at the University of Borås. A car that consisted of 15-20 percent biocomposite material from the forest was shown. The car had been built by Metropolia University of Applied Sciences in Helsinki and the Finnish forestry company UPM.

"Seeing a car in biocomposite material in reality was, I think, the inspiration for both companies and researchers to continue to develop similar products together," says Cecilia Ramberg.

Still a long way to go

Skrifvars's research group in polymer technology at the University of Borås today consists of five researchers. Behnaz Baghaei is one of them. Another researcher is Sunil Kumar Ramamoorthy , from Chennai in India. He came to Borås six years ago to research and complete a doctorate. Last year, he finished his thesis at only 27 years old. Now he continues to work on various research projects.

"Despite the fact that my family remains in India, I feel that I have come to the right place. I want to help solve the problems of plastic. In my home country of India, there is a lot to do to capture and recycle all the plastic that litters everywhere."

Similarly to Behnaz Baghaei, Sunil Kumar Ramamoorthy develops biocomposites of textile fibres and bioplastics. Dressed in a white lab coat and goggles, he stands at a fume hood in the lab and melts together substances under high heat. 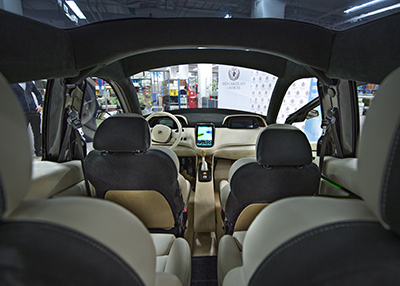 "I use fibres from recycled hospital blankets, Swedish wood pulp, and plastic made from soybean oil. From that, I get up a strong material that can be used in car doors," says Sunil Kumar Ramamoorthy.

He shows a hard and rigid sheet of biocomposite. So far, the composite can be used only inside vehicles because the material does not resist wate

r. But Sunil Kumar Ramamoorthy thinks the problem can be solved in the future. He explains that a previous problem was that the biocomposite smelled like hay. But by precisely controlling which parts of trees are included in the pulp, he has been able to get the smell of the final composite to be more like plastic.

"Owners of new cars may not want to have a car that smells like hay," he says, laughing.

In cooperation with the contractor Juteborg AB, Sunil is also developing jute biocomposites for automotive components. Else-Marie Malmek, one of the founders of Juteborg AB, says that jute is grown in large quantities in rotation with rice, among other things, which means that the plant does not compete with food production. It is also compostable.

"Jute is stronger than steel and is an inexpensive and lightweight material. Therefore, jute suits well as reinforcement material in the automotive and construction industry," she says.

The project JuteLight means that Juteborg AB collaborates with researchers Sunil Kumar Ramamoorthy and Mikael Skrifvars at the the University of Borås. The cooperation also includes Volvo Cars and Swerea SICOMP. They jointly are undertaking a feasibility study to evaluate jute's properties as reinforcement material in composites in future cars. The plan is that the result will later be used in the industrial production of cars.

"For us, as a small entrepreneurial company, it is important to take the help of researchers to develop new materials and be able to perform analysis on a scientific basis. We have ideas and contacts in the jute trade, but we lack the knowledge and experience to make detailed inquiries and tests of the material", says Else-Marie Malmek.

Bridge builders between research and industry

The researchers in polymer technology at the University of Borås are working not only to develop bioplastics and biocomposites; they are also developing solutions so that composites and plastics can be recycled. Docent Dan Åkesson says he often works with companies, such as flooring company Tarkett, plastic manufacturer Hammarplast, and forestry company Södra, to find new methods for recycling.

"I think it is important that our research be used for industry so that the end result is not likely to be a scientific report that nobody reads," says Dan Åkesson.

Even his colleague Adib Kalantar in the research group has close business collaborations as he develops new methods for geothermal energy. Half the time, he's in the laboratory at the University of Borås, and the other half he is at his geothermal energy company Muovitech in Bramhult. He believes that the research benefits from having strong links to industry.

"I can always work with ideas that will have practical use," he says.

But there are also challenges to collaboration. Sometimes the company wants to have quick results that he cannot give them.

"In research, you cannot make any guarantees in advance. It can be a long process before I can present a certain result. At the same time, the company can greatly benefit from the new knowledge that emerges," says Adib Kalantar.

"I see myself a bit like a bridge builder between research and industry."

Read more about the Swedish Centre for Resource Recovery