Is textile thinking the answer to future needs to find new ways to live? The graduate students within the EU project ArcInTexETN are architectural, design and textile graduate students who are looking for answers as to how we can live more sustainably in the future.

"I want to create symbiosis between man and nature in the field of interior design," says doctoral student Svenja Keune, and elaborates, "I'm experimenting with biological materials such as bacteria, mosses, algae, seeds and other things that grow. We need to think about how we want to live on this planet and how we act towards each other and our environment."

Experiments on the design of the future

Svenja Keune is one of the PhD students in the EU-funded research project ArcInTexETN. The goals are magnificent — they explore new ways for how we can live and work sustainably in the future. But it is not primarily about finding new sustainable material — it may be included — but the focus is on how we can design and use new materials in the future. If we start to produce, say, a new kind of plastic bag that consists of a durable material, how can we carry it? How can it look? ArcInTexETN is the EU project that explores and experiments on future designs. Therefore, 15 graduate students in architecture, interaction design and textile in different locations around Europe are carrying out research and experiments and asking themselves questions. But they are not isolated in their universities or companies; rather, this is a project that aims as well for various disciplines to cross-fertilise one other. There is a training network — ETN stands for European Training Network — which means that the research will be conducted in network form and that researchers can learn from each other. Another requirement is that doctoral students are in the beginning of their research careers. However, not just any students are included. The EU project is a project of the prestigious Marie Sklodowska-Curie Actions (MSCA), which means that the people involved have, in various ways, distinguished themselves in their field of research and are able to conduct excellent research.

"I got my idea from Delia Dumitrescu who works as a post-doc here at the Swedish School of Textiles," says Lars Hallnäs. “Her doctoral thesis deals with textile fabric architecture and interaction design, so we decided that we would plan a different sort of conference. Normally, you send in papers to these kinds of conferences. But we opened up to the opportunity to do exhibitions. The themes were: textiles, interaction, new media art, digital architecture and smart textiles.”

It turned out that the approach was brilliant; it was like opening Pandora's box. The conference made it clear that there is a great need for contacts and exchanges between these disciplines in academia and so the network ArcInTex was created. The name consists of a combination of abbreviations for architecture, interaction design, and textiles. The network currently has members from a variety of universities around the world such as MIT in Massachusetts, the Royal College of Art in London, Auckland University of Technology and many, many more.

It was decided to meet twice a year and the first meeting was held in the autumn of 2012. On the agenda soon came the question of how the network could finance everything there was to explore and develop. Could they apply for money from the EU program Marie Sklodowska-Curie Actions and launch an EU project? Well, it was certainly possible. The EU project was called ArcInTexETN — the same name as the larger network with the addition of “ETN” to mark the European project and that this is a training network for young, promising researchers. In January 2015 the kick-off took place when the organisation around the project was decided. A consortium of six universities and two companies forms the foundation and the Swedish School of Textiles in Borås has a leadership role.

In the summer of 2015, the 15 doctoral students joined the project. One of them is Svenja Keune. She is from Germany and has a Master's degree in textile design. Svenja has her office at Svensson AB Kinna, a family business that started out in lace and curtain manufacturing but are now experts on textile materials for greenhouse and indoor environments. In her bright office hangs a plethora of different textile materials. So far, nothing unusual for a graduate student in a design department. What is not usual is that the textiles contain plant parts. Seeds, coffee beans and plants germinate, sewn into the crocheted creations, and even soil is integrated into the fabric.

"I develop textile structures that can grow and degrade naturally and thus be adaptable and 'responsive'. These material changes will challenge how we perceive and live with textiles in our environment and create awareness, knowledge and a stronger connection to nature," says Svenja Keune.

Textiles as a concept

In the clattering factory at Svensson in which large fabrics are produced, Svenja has a few tubs placed in a corner. She produces kombucha in them. Kombucha is a mushroom used to produce a kind of sweet tea. But when kombucha dries, it forms a thin but cohesive sheet that look like leather.

"I see how Svenja will be able to challenge us at Svensson both when it comes to material and its functions as well as in conceptual thinking," says Dorte Bo Bojesen, design director at Svensson and Svenja's supervisor at the company. Dorte continues, "Svenja is playful and humorous, and she will contribute a lot, not least with ideas about biotechnology and organic materials."

The ArcInTexETN project is divided into three groups, or clusters, if you will. The basic and overall theme for all three clusters is textiles. But not primarily textiles as material, rather textile as a concept. It is a kind of textile thinking, because the textile material by nature is very adaptable. 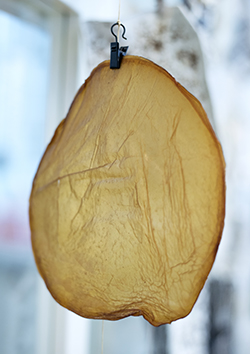 "Textile thinking is in itself a paradox," says Professor Lars Hallnäs, who is also the network coordinator for ArcInTexETN. He continues, "textiles have no definite form or fixed appearance, while having an infinite number of shapes and appearances, and it is this that makes textiles so extremely customisable. I want graduate students to open new doors for how we can use textile thinking in the future.”

The PhD students are now in their second year. Experiments and innovation tests are in full swing. There are ideas about textile materials with crazy features, such as a fabric that becomes thicker when you stretch it out, and there are plans to visualise scents, perhaps with the aim of using the sense of smell as a learning method. One student is wondering how smart technological solutions can transform the fashion world and another is sketching out a fashion alphabet. But while progress is being made, the PhD students need to plan for the future. They need to already have an idea of how their innovations can be put into practice, which is one of the requirements from the EU. Contacts with organisations and companies are growing even now in order to involve future stakeholders who can take over and turn ideas into reality.

Iva Rešetar is an architect within the research group. She studied at the University of Belgrade and at Städelschule in Frankfurt am Main, and she has received several awards, including a scholarship from the Akademie Schloss Solitude in Stuttgart. She is based at the Berlin University of the Arts, but in the autumn of 2016, her entire group is located at the Academy of Arts in Vilnius. As the training network means exchange and learning between researchers, the doctoral students swap their host institutions with one another twice. There is no doubt about Iva Rešetar´s choice to become part of the ArcInTexETN project: "What I perhaps like the most about the project is that it is an open invitation to us to use adaptive qualities of textiles as a basis to speculate about the future forms of living."

She speaks of her architectural project that dealt with inhabitable textiles, completed some years ago. In one room, a large, suspended hammock was installed for common use and transformed the existing space into an elastic environment. When people use it together, the three-dimensional net stretches out, swings and adapts to the bodies, creating a feeling of being connected both to the room and the others within it.

"What is interesting to me as a researcher is to investigate interdependencies between a physical form and a social variable. Textile architecture can radically change the way we construct, perceive and inhabit the space" says Iva Rešetar.

Talking about her current doctoral research, Iva Rešetar says that in the context of adaptive architecture, one pays a lot of attention to the design of "building envelopes". A definition of a building envelope is, simply put, what separates the inside from outside. In contemporary architecture there is usually a big distinction between them. Envelopes are more and more insulating, while the indoor climate is controlled by mechanical systems. In many buildings today, windows can't even be opened. As opposed to that, Iva Rešetar's research explores how various architectural elements can thermally adapt to the surroundings and affect local climate. Energy exchange principles can be integrated into envelopes and become new tools for design.

"Entire buildings can be seen as material system that interacts and exchanges energy with the larger environment and its inhabitants", says Iva Rešetar and concludes: "Thermal comfort is one of the basic needs that connects architectural space with the human body. In the future I would like the architecture to offer advantages of variable thermal conditions that respond to the needs of the human body".

The project started 1 January 2015 and runs for four years, but the doctoral students' work lasts for three years, between 1 July 2015 — 1 July 2018. The additional time is for administrative work. The researchers linked to the Swedish School of Textiles have four years to complete their theses. This is because different countries have different rules for research. Read more about the project ArcInTexETN at arcintexetn.eu

Svenja Keune, Iva Resetar and the other graduate students are completely convinced of their cause. We humans need to do everything we can to find new ways to live sustainably in the future. One of the axioms of research in ArcInTexETN is about the need for fundamental changes to the way we live; this means it also requires a radical new way of thinking about design. To think more textile, perhaps?

* FOOTNOTE
Wearables means that computer-based technology is built into portable products such as clothes and accessories that are worn on the body.

Read more about ArcInTexETN and see a film on the project