Scania and Volvo have different organisational models—which way is best?

How should a company be organised to be profitable and viable, where employees thrive, develop, and deliver—all at the same time?Today, industrial work is characterised by set standards, short production times, and assembly lines. Is it possible to combine these elements with a high degree of involvement by and freedom of employees, a model that was previously common in Swedish industry? 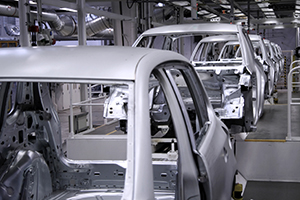 The Swedish production model, a way of managing and organising work, was at its peak in the 1970s and 1980s when the Swedish automotive industry flourished. The ideal was a sociotechnical system in which Volvo and Scania were two of the role models; it received significant international attention.

Car manufacturing. Workers were told how many cars they were to build and they were free to determine their work pace while working in semi-autonomous teams. A high degree of participation and development of the work was the basic idea. At the same time, workers were highly engaged, explains Margareta Oudhuis, Senior Professor of Working Life.

But there were problems. Workers usually received piece-work pay, which meant they could work very hard for a few hours and then be done for the day, instead of taking advantage of the full potential of the work model. In the mid-1990s, the principles of lean organisation starting appearing: an organisational model in which the workers instead worked on continuous production lines. The strength of lean is its ability to improve operations based on systematic and standardised approaches, thus reducing errors and the proportion of "lemons," or defective products.

Two organisational models
Lean: An ideology aimed at maximizing customer benefits while minimising the waste of resources through different types of efficiency strategies.
Sociotechnical system: The basic ideas are a developed employee relationship; developmental work with a high degree of self-determination and influence; participation in decisions; responsibility and delegated powers.
Source: Wikipedia

"There is a soft lean and a hard lean, and the softer version has worked well in some places. But elsewhere lean has been, and is still, used as a pure instrument of efficiency. The philosophy behind it is forgotten, that of long-term thinking and learning as important elements."

With too much focus on eliminating waste and reducing time, companies risk creating not only extreme monotony and a lack of commitment, but also a lack of space for innovative processes. A high degree of staff turnover is also common.

Now, together with Stefan Tengblad, Professor of Business Administration at the University of Skövde, she is studying the organisational models of Scania and Volvo Trucks. What they looked like at the beginning of the 1990s and what they look like today.

"We are investigating whether the Swedish organisational model has completely disappeared, or perhaps rather if a synthesis between sociotechnical systems and lean has emerged," says Margareta Oudhuis.

The researchers have identified earlier models based on literature studies and subsequently interviewed managers and unions in their respective companies; they have also shadowed managers.

"Interestingly, they differ a lot. Scania began to introduce lean already in the mid 1990s and is now an industry leader. They are trying to introduce a softer model and focus on continuous improvement as a way of promoting worker engagement."

At Volvo, researchers see signs of a new organisational model, where the intention is to combine lean tools with a sociotechnical system of work organisation in terms of participation and more developmental work. In both companies, management sees employees as experts.

"In actuality, it is fairly obvious that if employees can participate and make decisions, they will also want to work harder and feel loyalty. The result is increased efficiency. There must be a balance between reliability, efficiency, and changeability," she says.

Their study also shows that a large proportion of attempts to implement lean fail because, among other things, there is often a short-term goal of quick profits.

"It is quite interesting to follow these companies and it will be fun to see how things progress," Margareta Oudhuis sums up.

The project is funded by Forte and will conclude at the end of 2018.