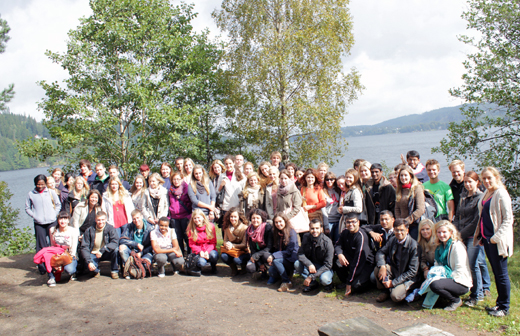 We started our tour on Sunday 11:00 am outside the library. We had two buses and we went to the city square where we were shown the church built in many years back. The City Hall, a shop were dresses from so many years are sold and displayed. After touring the city square we went to Ramnasjön (Ramna Lake) after which we were also shown the railway station and the Södra Torget where people board buses going to every part of the town. We went to the church museum where we took a short break and got a chance to get into the church where we saw sculptures of Jesus and his family. The church was heaven and hell and when one dies he or she is buried facing a particular direction so that he does not come back as a ghost to disturb people.

We saw a place which is called old regiment where soldiers used to stay a long time ago. But it has been changed and now has a lot of schools like the Montessori school for children from 1-18 years. We also went to lake Almenäs for another brake and got an opportunity to see the lake and learn about how it was formed through the process of glacial deposition – this is where we took the group photo. The lake is the main source of supply of water for the city of Borås and also during summer people swim in it.

On our way back we were shown the hospital and the municipal offices and police headquarters. Later we saw Pinocchio which is a statue of a boy walking to Borås that was made by Jim Dine from America. We parted for the day at the university.

It was a nice bus tour and also the first time we went by us in the city. We thank the university for arranging such an enticing tour; the drivers who took us around places and lecturers who guided us.